HomeSportsPack women and men basketball wind down their seasons with wins as they look to finish strong
Sports
4 years agoSports
1.2kviews
0shares 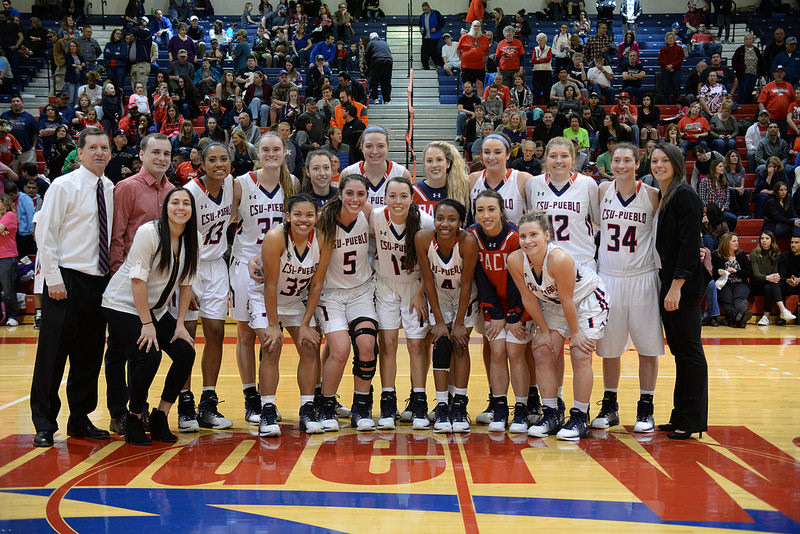 On senior night, Colorado State University- Pueblo Men and Women’s basketball both won their games and conclude the regular season next week.

The CSU-Pueblo Women’s Basketball were able to clinch their first outright Rocky Mountain Conference title last night after an 80-72 win against Colorado Christian University. The win puts the pack at a 25-1 record, the women also set a record with their 19th RMAC win of the season, most in school history.

Head Coach Jim Turgeon said the team celebrated but the team also have different goals in mind. “What was really cool is the fact that we didn’t cut down the nets because we have other goals we want to accomplish,” he said. “But I can assure you we celebrated in a private locker room after the game.” Turgeon adds.

Last night was about the seniors, the pack started four to begin the contest and jumped out to a 5-2 lead thanks to Jaszymn Johnson. Johnson and fellow seniors, Ana Gurau, Maddie Beagley and Angie Moore will leave Pueblo with the most wins of any senior class.

The Thunderwolves throughout the game won the battle of bench points, outscoring Colorado Christian 50-9 in the category. The pack coming out of the second half would trail 43-38 with 3:14 left. At that moment is when junior, Taylor Long would catch fire, making three after three and gave the pack a 13-3 run leading into the fourth quarter.

The Colorado State University-Pueblo Men’s Basketball also had senior night last night. The men were able to hit seven 3-pointers in the first five minutes of the second half after going into halftime trailing 39-37.

Before the contest, the Pack recognized five seniors from the team. Two out of the five, Nelson Kahler and Rico Spikes were able to post double-doubles, making it Kahler’s third and Spike’s fifth.

The teams leading scoring was junior, Mark Williams. Williams kept the team in the game early by scoring 17 of his 21 points in the first half and also was able to collect six rebounds and three assist.

The Men’s team, just like the Women’s were able to win the bench points category, winning the battle 25-2. The Colorado Christian Cougars were able to shoot a higher field goal percentage but it was the Pack’s 8-for-16 (50%) 3-point percentage that was the game changer and ultimately changed the momentum of the game.

With the win, the ThunderWolves improved to 18-7 and 16-4 in conference play. The Pack sit at third place in the conference behind Colorado School of Mines and Fort Lewis College, who’re both sitting at a 17-3 record.

Helping families in Pueblo is mission behind Holiday Blessing Store