Sports information director, Anthony Sandstrom, won the 2009 Outstanding Professional Employee Award, which represents the face of all 16 intercollegiate sports at Colorado State University-Pueblo. Sandstrom graduated from CSU-Pueblo in 2003. This is the first time he has worked for a university.

After graduating Sandstrom wrote features for the Fountain Valley Newspaper.

“I wanted to be a sports journalist at first, but when I saw the job opening at CSU-Pueblo for a sports information director I jumped on it because it was specific to my interests,” Sandstrom said. 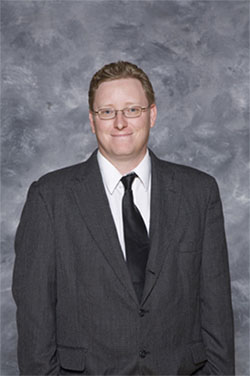 Sandstrom has been the sports information director since August 2007. The atletic department added three new athletic programs all in one year.

Many universities have separate sports information directors responsible for one sport a season or who concentrate on either men’s or women’s sports individually.

Sandstrom attends most men’s and women’s home athletic event so he can provide information for press releases, interview requests and statistics to the media as well as conference and NCAA officials.

“I know it sounds funny, but eventually you get used to never having a day off and seven day-work weeks,” Sandstrom said.

GoThunderwolves.com is a new Web site is maintained by Sandstrom as well. Sandstrom puts ads on the Web site as well as graphics.

“This Web site was a great jumping off point, especially when recruiting students for our sports programs,” Sandstrom said.

Sandstrom earned the top honor from among eight nominees for the 2009 Outstanding Professional Employee Award.

“I want this department to grow to offer the best athletic programs possible,” Sandstrom said. “I am just happy that I can be part of it.”

No events held for eating disorder awareness, but campus recognizes the problem

President of the International Students’ Association receives a big honor