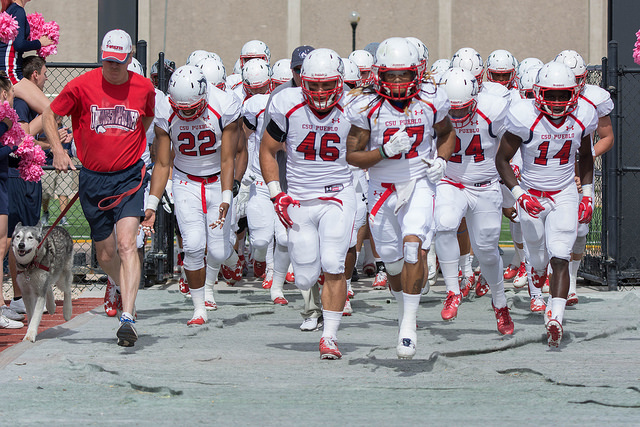 The Colorado State University-Pueblo ThunderWolves football team’s rushing attack stole the show in a 56-12 victory over the Adams State Grizzlies at Adams State.

The Pack totaled 394 rushing yards, which is the most since the re-start of the program in 2008. Junior running back Bernard McDondle accounted for 276 of those yards on only 18 carries.

McDondle also scored four touchdowns, and each touchdown was from 20 or more yards out, the longest being an 80-yard run. Redshirt freshman running back Austin Micci also added 97 yards on 12 carries and a touchdown.

The offense totaled 645 yards, which is also the most since the restart of the program. “We were able to convert and make big plays,” said ThunderWolves Head Football Coach John Wristen.

The defense also had some issues defending the pass this game as the Grizzlies had 378 yards passing and two touchdowns. Two of the Grizzlies receivers had 100 yards receiving; the Grizzlies also threw the ball 64 times.

Meanwhile, it took the ThunderWolves until their second drive to score the first touchdown then scored touchdowns on the next five drives. The score at the half was 35-6.

It was in the second half when the offense started to slow down. The offense only scored two touchdowns and punted three times out their seven drives. Two of those drives were touchdowns, one was a fumble, and the last drive was the last one of the game.

Fumbles could have been a problem in this game as the Pack had four fumbles but only lost two. One was my Micci, one was by junior wide receiver Osha Washington, and the other two were by Dausin.

Penalties could have also become an issue as the Pack committed six for a total of 75 yards.

The Pack scored 48 or more points in three straight road games at Adams State, which brings the winning streak against Adams State, to eight.

The ThunderWolves will return home to play Fort Lewis College in the homecoming game at 2 p.m. at the Neta and Eddie DeRose ThunderBowl.

Ray Kurzweil, the director of engineering at Google, on DNA