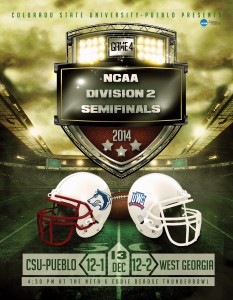 The Colorado State University-Pueblo football team is ready to take on the West Georgia University Wolves this Saturday in the semifinal game of the NCAA Division II championship.

The last time the ThunderWolves took the field, they won their seventh straight game, a 31 to 28 victory over Angelo State. This is the first time in program history that the team has made it to the semifinal game and the first time a team from the Rocky Mountain Athletic Conference has been in the final four of the Division II championship.

The Pack is currently second in the nation with a turnover margin of +24. The team has gained 42 turnovers and lost just 18.  In the last seven games, the ThunderWolves have out-scored their opponents 298 to 98, averaging more than 41 points per game.

During the same seven-game stretch, the Pack recorded a +12 turnover ratio, scored four defensive touchdowns, had three punt return scores and a safety.

Saturday, the ThunderWolves take on the West Georgia Wolves, who suffered two losses in the span of three games Oct. 11-25.  The Wolves have since won six straight games, including three NCAA Playoff games.

The Wolves are coming in as the No. 6 seed in Super Region Two and have been on the road for all their playoff games. The Wolves rank 19th in the nation in rushing offense with 231.6 yards per game. Seth Hinsley is the top running back for West Georgia with 1,345 yards and 96.1 yards per game.

Saturday’s game will be the first time the ThunderWolves and Wolves have met, and the outcome will decide who moves on to the NCAA Division II Championship game in Kansas City, Dec. 20.

Saturday’s game will be broadcast on ESPN 3 and the athletics department hopes to pack the ThunderBowl to improve the home field advantage.

Kickoff is at 4:30 and tickets are still available at the ThunderBowl box office or online at gothunderwolves.com.

Thunder Down Under Music Fest entertained small crowd at CSU-Pueblo

Helping families in Pueblo is mission behind Holiday Blessing Store

Pueblo East and South face off for annual Cannon Game