Late in the game, CSU-Pueblo could not contain Drury’s offensive tandem of Kassie Walker and Ja’Nell Jones, as the Panthers defeated the ThunderWolves 68-56 Saturday night at Massari Arena to close out the Chuck Stephens Classic.

Walker and Jones, both all-tournament performers, combined for 39 points. Walker had 22 points and Jones added 17 points.

To make matters worse, the ThunderWolves saw a 12-point lead to start the second half dwindle before their literally tired eyes. 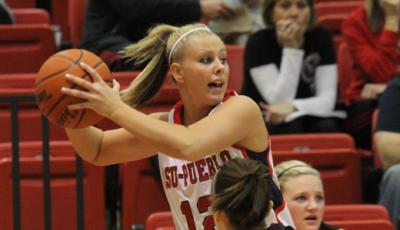 “I think we got a little tired at the end there,” ThunderWolves coach Kip Drown said. “We’ve got nobody to blame but ourselves.”

Drown said his team has a thin bench right now due to injuries and was forced to play Kendall Babler, Rachel Espinoza and Amanda Bartlett 30-plus minutes each.

The ThunderWolves did not have the best night at the charity line either, going just 8-19.

Besides leading the team with 15 points, the returning all-RMAC performer Espinoza was only 2-7 from the free-throw line and missed her first four attempts.

“I don’t know what happened, but it was disgusting tonight,” Espinoza said about her performance from the free-throw line. The ThunderWolves were also out-rebounded for the first time this season 47-29

“If you’re going to win at this level and against this caliber of opponent, you better be able to rebound and hit free throws,” Drown said about a Drury team that was a sweet 16 performer in the NCAA tournament last season.

The ThunderWolves were able to hold onto their lead in the first half by holding the Panthers to a  dismal 28 percent (10-28) from the field and a dismal 14 percent (2-14) from 3-point range in the first half.

Bartlett had the hot hand early for the ThunderWolves in the first half with 10 points, but only landed one field goal in the second half of play. She ended the night with 12 points.

Freshman phenom Bethanie Funderburk, who scored 28 points in Drury’s overtime loss to Adams State, was held to 1-3 shooting and three points in the first half and only 7 points total for the game.

However, it was Jones and Walker who stepped up for the Panthers tonight. Good teams with good players will do that, Drown said.

Walker only scored seven points in the first half, but began her 15 points second half 30 seconds into the second hald with a 3-pointer that cut the ThunderWolves lead to four points 35-31.

Freshman Alex Evans’ breakaway layup gave the ThunderWolves their largest lead at 45-43 at the 15:15 mark, but an 8-0 run after a Walker 3-pointer tied the game up at 50 with 8 minutes left in the game.

Walker followed her 3-pointer with a fast-break layup to give the Panthers their first lead since the beginning of the first half 52-50 before a pair of Erica Hicks free throws tied the game up at 52.

The Panthers got a jolt of life after Jones 3-pointer put them up 55-52 and a plethora of missed shots and defensive breakdowns by the ThunderWolves led to the Panthers taking control of the game.

“They played with a lot more composure, and you can’t let good teams off the hook like that,” Drown said. “Bottom line is that they stepped up and made big plays and we didn’t. I tip my hat to them.”

The ThunderWolves move onto RMAC play next Friday at Massari Arena against the Chuck Stephens Classic MVP Vera Jo Bustos (38 points Friday night) and Adams State. The Grizzles defeated Dubuque University 80-56 earlier in the night and were led by Kelsie Kruger’s 21 points.

CSU-Pueblo’s lone all-tournament performer was Kendall Babler, who had 14 points Friday night against Dubuque. Tip-off against the Grizzles is set for 6 p.m..

Ka-Mitt to skating in Pueblo