The ThunderWolves gave a great effort, but in the end it wasn’t enough to upset top seed Metro State College.

With Metro State leading 37-35 midway through the second half, the Roadrunners ripped off a 17-5 run to take a commanding 14-point lead. The ThunderWolves pulled to within six points on two Rome Smith free throws with two minutes remaining, but Metro State forward Nelson Ekeh nailed two free throws to push the lead 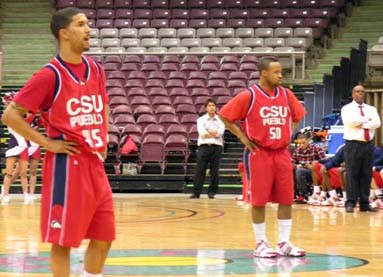 On the ThunderWolves’ next possession, Jordan Surratt missed a 17-foot-jumper from the left wing and Jake Trahern missed an easy putback. The Roadrunners made their free throws down the stretch to pull away and seal the victory.

“Metro is a really tough team to beat,” CSU-Pueblo senior center Jake Trahern said. “In order to beat them you have to make them pay for their mistakes.”

Rome Smith, playing his final game for CSU-Pueblo, led the ThunderWolves with 24 points and 12 rebounds. Smith single-handedly kept the Pack in the game after Metro State pushed the lead into double-digits, scoring 10 straight points for the ThunderWolves to help cut the 14-point deficit to six.

But it wasn’t enough.

Turnovers and rebounds were the story for CSU-Pueblo. The Pack committed 24 turnovers and surrendered 14 offensive rebounds to the Roadrunners.

“We knew we would have to limit turnovers and offensive rebounds to win,” ThunderWolves head coach Pat Eberhart said. “We shot good enough to win, but we turned the ball over too much.”

CSU-Pueblo shot 50 percent for the game, but they couldn’t overcome mistakes and second chance points from Metro State.

The Roadrunners stepped to the free-throw line 29 times in the second half and made 23 of their attempts. CSU-Pueblo only attempted two free throws in the half, making both.

Wagstaff struggled from the field, shooting 5 of 16, but he made up for it at the line by knocking down 11 of 15 from the charity stripe.

No events held for eating disorder awareness, but campus recognizes the problem