The ThunderWolves are where they wanted to be.

Colorado State University-Pueblo shot  59 percent from the field as they upset top-seeded Fort Lewis College for the second consecutive year in the RMAC Shootout semifinals, 83-65.

“They 100 percent outplayed us in every facet of the game,” Fort Lewis head coach Mark Kellogg said.

CSU-Pueblo jumped out early on a shell-shocked Skyhawks team, opening up a 16-point first half lead. It was the largest deficit Fort Lewis faced this season. 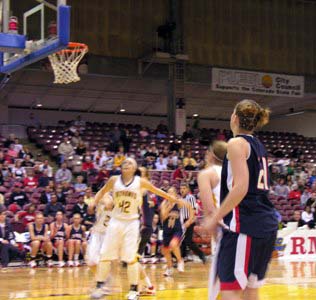 ThunderWolves’ center Sarah Staggs recorded 12 points, five rebounds and two assists, all season-highs. Staggs, a 2007-08 all-RMAC honorable mention, missed the first half of the season with an injury.

After controlling the game for the first 30 minutes, the ThunderWolves faltered on the offensive end and let Fort Lewis back into the contest.

“They started to deny me and the wings,” Espinoza said. “They took us out of our offense a little.”

The Skyhawks closed the gap to 61-57 with 7:42 left, but CSU-Pueblo responded with a 9-2 run to push the lead back to double digits.

The ThunderWolves won easily despite a strong performance from Fort Lewis star Alison Rosel. She led the Skyhawks with 18 points and 14 boards.

Fort Lewis was held 11 points below their season average of 76 points.

“We were just fearless on the floor,” Drown said. “We just played as hard as we could and had a really great performance today.”

The Skyhawks, ranked as high as number two last month in the Division II top 25 poll, suffered their third loss of the season. Even with the semifinal loss, Fort Lewis is likely bound for the Division II postseason tournament.

CSU-Pueblo will play the winner of the second semifinal matchup between Colorado School of Mines and the University of Nebraska-Kearney tomorrow night at the State Fair Events Center. The game is scheduled to tipoff at 6 p.m.

“When we shoot the ball we can play a lot of people,” Drown said.

The winner of the RMAC Shootout championship game will earn an automatic berth into the Division II postseason tournament.

Millions across the world to practice earthquake preparedness Thursday