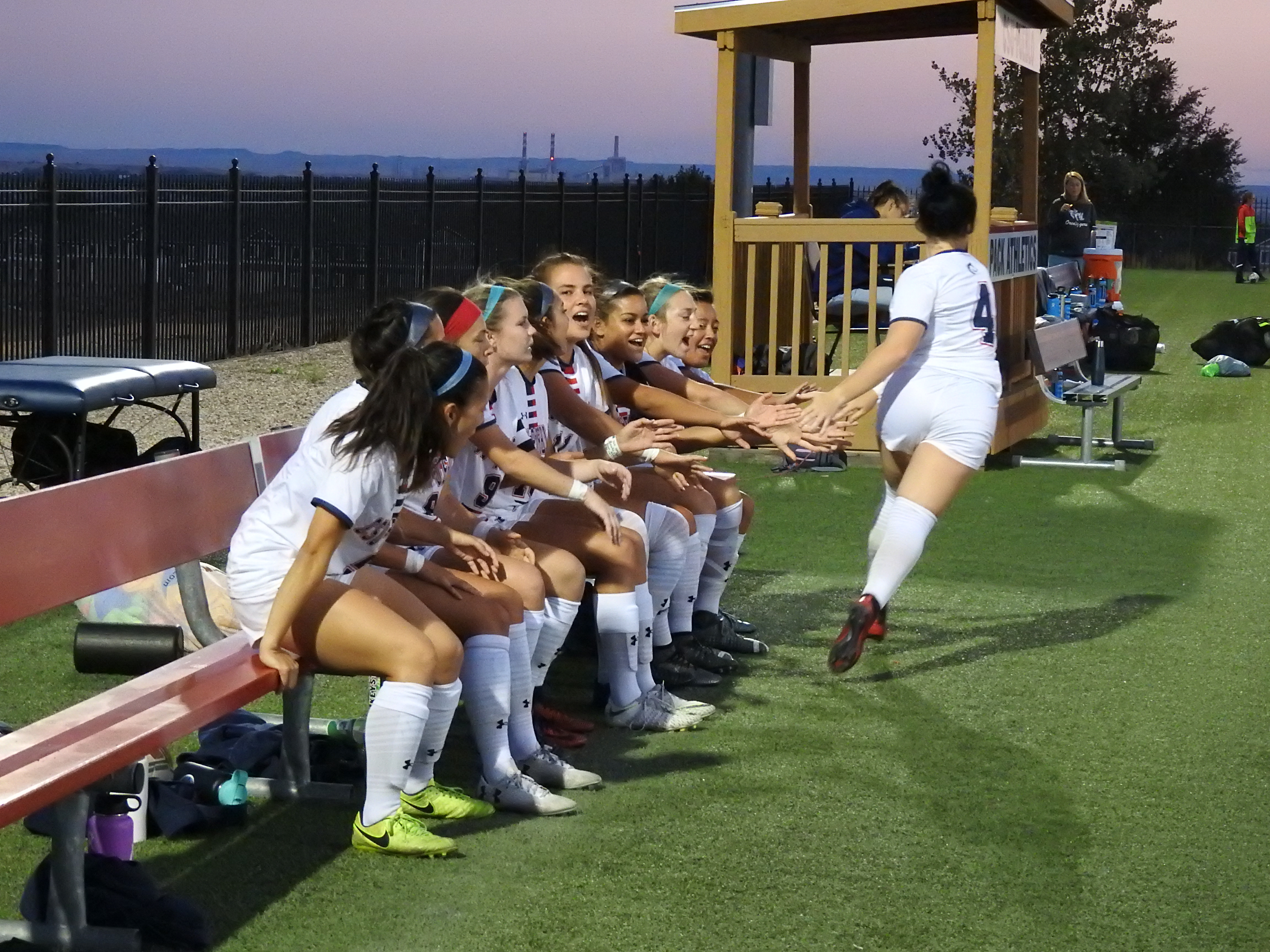 Team cheering on #4 Callie Larson as she runs onto the field. Photo by Rulo Yimar Reyes
1.5kviews
0shares

Despite a scoreless first half, a penalty kick scored by No. 7 Colorado Mines’ Jennifer Kendall was the first of two goals in the Orediggers 2-1 Friday night victory over Thunderwolf Women’s soccer team.

Thunderwolf goalkeeper Rylie Martin, who finished the game with seven saves, was charged with the foul in the 56th minute. Head coach Sierra Cardenas said the call was “unlucky.”

“It’s far from what I could see,” Cardenas said. “Our goalkeeper came out and was aggressive off her line.” Though Cardenas said she thought Martin went for the ball, she said it wasn’t her call to make. “Unlucky, that’s the game sometimes,” Cardenas said. “We control what we can that’s what we tell the girls.”

The Orediggers scored again four minutes later with an unassisted goal by midfielder Acacia Ortiz. Despite being down, Cardenas said she did not feel a loss of momentum. “Goal for, goal against, we keep pushing,” Cardenas said. “I told them if we give up a goal, we punch back.”

The Thunderwolves scored their first Rocky Mountain Athletic Conference goal of the season in the 64th minute. Thunderwolf midfielder Karley Whiteman’s free kick bounced off a wall of Oredigger defenders and into the low right hand corner of the net. The goal was Whiteman’s third for the season.

The Thunderwolves were awarded two more set pieces in the final two minutes, but were unable to score on either attempts. A free kick by forward Laikyn Koss sailed wide and a Kylee Sakaguchi cross off a corner kick to Whiteman was saved by Oredigger goalkeeper Shannon Mooney, giving Mooney her sixth and final save of the match.

Cardenas said the game was “very close.” “I think that’s the difference of a call and it got a little bit scrappy, but it could have easily gone either way,” Cardenas said. “To be able to say that against the No. 7 team in the country means we’re on the right track.”

After the loss, the Thunderwolves remain winless in RMAC play with a conference record of 0-3-0 and a 3-3-1 overall record. “We focus a lot on just our confidence and our mentality when things aren’t going well and I think we really showed that today,” Cardenas said. “Sometimes you don’t get the result you want, even though you have the performance to back it up.”