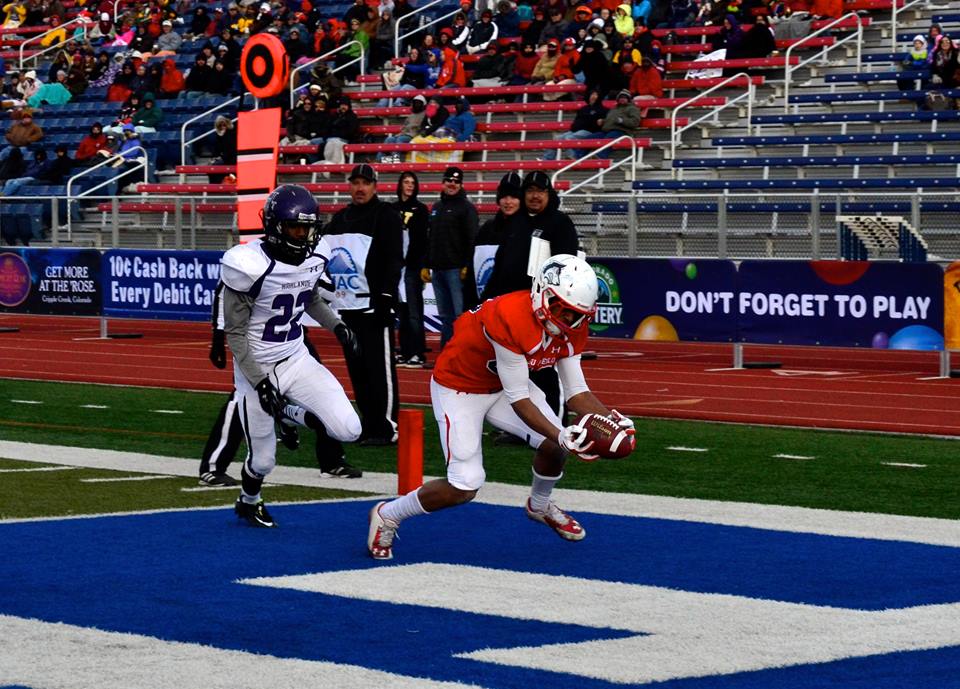 UPDATE!   CSU-Pueblo has a first-round bye in the NCAA Division II playoffs.  The first game for the ThunderWolves will be November 29 at the ThunderBowl, where they will play the winner of the first round game between Michigan Tech and Angelo State.  Playoff tickets will be available on the CSU-Pueblo Athletics website!

The Colorado State University-Pueblo ThunderWolves delivered a crushing loss to New Mexico Highlands Saturday, taking the Rocky Mountain Athletic Conference championship for the fourth straight year by a score of 44-21.

New Mexico Highlands came into Saturday’s game with the best passing attack in Division II football, averaging 411 yards per game. The ThunderWolves held them to 156, which is 255 yards less than their season average.

CSU-Pueblo trailed early when quarterback Chris Bonner threw an interception that was returned by Highlands’s cornerback Taj Mathis for a 66 yard touchdown run in their opening drive. But Bonner and the ThunderWolves offense bounced back quickly, and on the very next drive, they went 75 yards in 10 plays, finishing with a nine yard touchdown pass from Bonner to Thompson to tie the game.

On the ensuing drive, CSU-Pueblo took over at the 50 yard line and marched down field where Bonner threw another touchdown pass for 14 yards to Khalyph Smith. Bonner finish with 177 yards in the air, the two touchdown passes and an interception.

To start the second half, the ThunderWolves showed no signs of letting up, pounding their way into the end zone on a 13 yard run by Cameron McDondle. McDondle finished with a season–high 227 yards on the ground, also making it the eighth straight game he’s run for 130 yards or more.

McDondle’s running mate J.B. Mathews found his way to the end zone later in the third quarter to bring the score to 30-7.

Marche Dennard had a three yard run for a touchdown two minutes later making it 37-7.

As a team, the ThunderWolves rushed for 356 yards.

On the next drive for Highlands, CSU-Pueblo’s defense made their presence known once again when cornerback CJ Roberts picked off a pass by Lance Oreader and returned it 60 yards for another touchdown.

Orender, who was averaging 385 yards in the air before Saturday, didn’t even crack the century mark as the Pack held him to 94 yards.

New Mexico Highlands added two touchdowns late in the game to make the score look closer than it was. They returned a fumble for a touchdown, and then backup quarterback Tanner Wright found Tyler Slavin with three seconds left to make the final score 44-21.

With the win, the ThunderWolves finish the season at 10-1, winning their fourth straight RMAC championship and the fourth in the seven years since the program returned in 2008.

The team will find out where they stand in the playoff picture at 3 p.m. Sunday during the Division II selection show. They’ll most likely receive a bye and host s playoff game Thanksgiving weekend.