Wendell Lee came into this game with high expectations and met those expectations, with 20 points and four rebounds in the first half.

“Not to be rude, but every team I have played on has expected me to step up and I feel like I did that tonight,” Lee said. “I have to take on this role as an impact player and tonight I wanted to get some shots up for my coach.”

Another player that stepped up tonight was Matt Rosenbaum, who finished with 15 points and seven rebounds.

With few games left in the season, a win tonight for the Thunderwolves pulls them even closer to solidifying the No. 5 position in the Rocky Mountain Athletic Conference standings.

“I thought we didn’t handle the ball like I wanted us to, but our guys definitely showed that they are getting better,” coach Ralph Turner said. “I was proud of Lee tonight, he shot the ball really well and I am happy for him to have a big game like this.”

“The coach really helped me to prepare for this game. He’s been telling me to relax and then shoot, and it really showed in my performance tonight,” Lee said

During the post game interviews, coach Turner walked over and hugged Lee. The two thanked each other and seemed pleased to get a win tonight.

If the playoffs were to start next week, the CSU-Pueblo men’s basketball team would have to travel to Colorado Mesa, a team that the Thunderwolves lost to by 17 points during the first meeting on Jan. 11.

CSC’s only lead in the game came early in the first half when leading by three. After this, the CSU-Pueblo men’s basketball players started scoring and never looked back.

Though there wasn’t too much pressure to win this game, as the CSC men’s basketball team was ranked last in the RMAC. However, CSU-Pueblo needed to win the game in order to prevent dropping to a lower seed for the RMAC playoffs.

The CSU-Pueblo men’s basketball team will be traveling to Metro State and Regis next week for big games leading up to the playoffs, the following week.

For further information about next week’s games, visit the CSU-Pueblo Athletics website at www.gothunderwolves.com 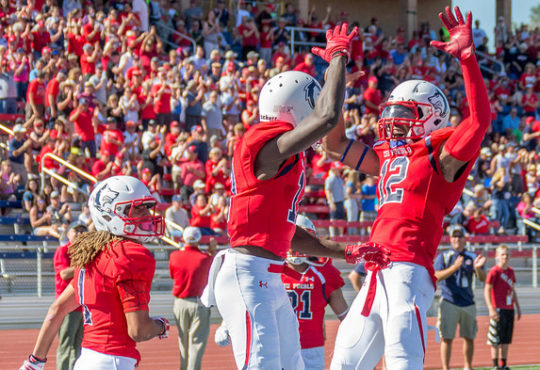 Put on pink and back the Pack