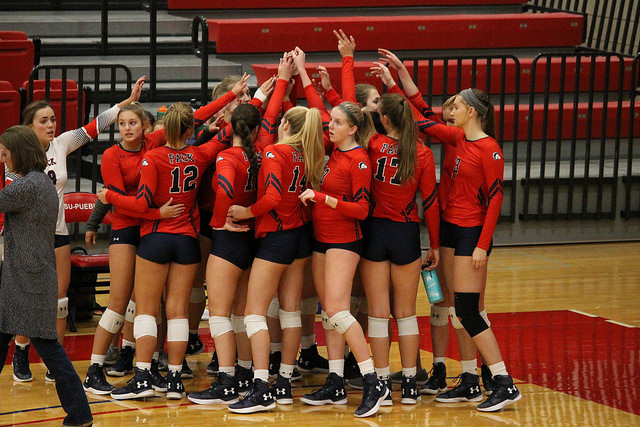 With just three games left in the season, the Colorado State University-Pueblo Thunderwolf women’s volleyball team is looking to finish the season strong. They play their next game tonight at 7 at Massari Arena.

Last week’s “Think Pink Night” at Massari Arena was a successful night for the lady Thunderwolves, as they snapped a 10-game losing streak. They won 3-0 against the Westminster Griffins. All of the three sets were competitive and hard fought by both teams. The Thunderwolves won the first set 25-20, the second set 25-17 and the third set 25-20.

Several players played a key part in the Thunderwolves’ sweep of the Griffins. Outside hitter Brooke Schilling led the way with 16.5 points and 21 digs. Grace Miles, a sophomore from Parker, Colorado, added another 12.5 points. Page Heller, a junior from Vancouver, Washington, was also frequently hitting the ball and finished with 19 digs. After the win, the young squad’s record improved to 5-19.

Libero Bayley Ricottone said “Most of the team is underclassmen and we are starting to get close to each other and understand how RMAC volleyball works.”

Their remaining schedule to build upon includes two home games and one away game.

“We are in the position to make some upsets happen against Adams, Fort Lewis and Highlands,” Ricottone said. “It can lead us on a positive note.”

As the 14th-ranked team in the Rocky Mountain Athletic Conference, a postseason run is not likely to happen this year for the Thunderwolves. However, head coach Jill Muhe said a strong finish is key to building up momentum. “We always want to finish strong no matter where you are and have this going on into the offseason,” Muhe said. Next season, the Thunderwolves are losing one member to graduation. Senior PuaLehua Keola led the Thunderwolves in digs as a junior, but was medically retired this season. Hitter and captain, ShiAnn Rodriguez said playing the season without a senior on the court was a “growing process.”

“We basically have the same team for next year and this year was a growing process,”  Rodriguez said.

ThunderWolves run over by Roadrunners