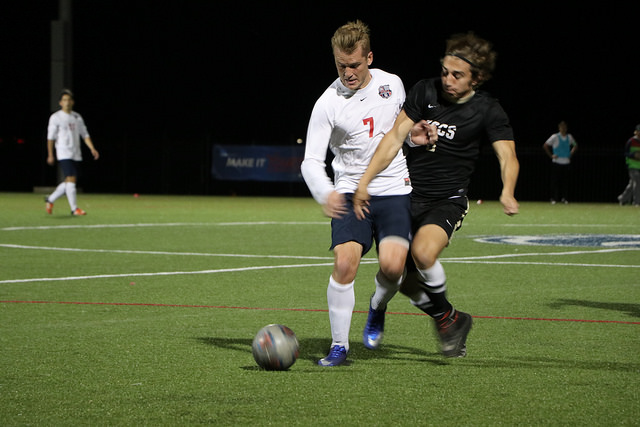 During the Pack’s fifth week of athletics in the 2016-17 seasons, ThunderWolves sports fans experienced something this week that they haven’t experienced at this level all semester: intense drama.

This week we saw heartbreak. We saw controversy. We saw triumph, and we saw dominance. We saw an underdog overcoming astronomical odds to get a win and lastly, we saw a heart-wrenching loss on the very last play of a game.

The last seven days in Pack athletics had all the types of drama that make sports so exhilarating and win or lose, Pack sports fans got quite the show from their programs over the course of the week.

Record-wise, the Pack went 3-4 overall in the sports of men and women’s soccer, football and volleyball, not including the men’s golf tournament or the men and women’s cross country meet.

So let’s take at a week filled with drama for the fans and athletes of Pack Sports.

Pack football lost a 20-19 heartbreaker in controversial fashion to Colorado Mesa University on Saturday, on the road against the Mavericks in Grand Junction.

The game ended in extreme controversy as two disputable ball-spots by the referees in the waning moments of the game resulted in a non-touchdown and ultimately a loss for the Pack.

The situation unfolded after freshman defensive back Tanner Draper blocked a CMU punt with the Pack down one, with less than a minute left in the game.

The Pack drove down to the CMU one-yard-line and tried two-straight quarterback sneaks with junior QB Rex Dausin, both of which looked to be touchdowns from the Pack sideline but were not called as such on the field.

The second of the two attempts was a gutsy call by ThunderWolves head coach John Wristen as the clock expired, as he elected to put the game in the hands of his quarterback rather than spike the ball and leave the balance of the game hanging on the leg of freshman kicker Nathan Taylor.

Had the sneak been called a touchdown, the Pack would have been riding high on a three game win-streak, but now, CSU-Pueblo will seek to improve upon their 2-3 start to the season with a much-needed RMAC win against the Adams State University Grizzlies on the road in Alamosa next week.

CSU-Pueblo women’s soccer got two big wins against Colorado Christian and Colorado Mines, respectively, bringing their record to 6-3 on the year with a 3-2 record in the RMAC.

Following up on an overtime victory against CCU in which senior Kacie Licata scored a goal in the 95th minute to edge the Pack over the Cougars, CSU-Pueblo took on No. 3 ranked Mines in a home game at the Art & Lorraine Gonzales soccer stadium.

The Pack scored a goal in each half, coming by way of junior defender Jessica Westhoff in the first, and senior forward Sandra Grimaldo in the second, to spark the Pack to a 2-0 victory.

The Orediggers came into the contest undefeated with a 9-0 record, including four conference wins. The Pack, however, brought that streak to an end to bring their home record to 4-1 after the team’s fifth shutout of the season.

The ThunderWolves will look to continue their momentum as they remain at home for their next five matches, beginning with Regis University, on Oct. 7.

Although many of the Pack’s sports teams have had their seasons marred by inconsistency, the model of performing their best, day in and day out, has been the men and women’s cross country teams.

That stood true once again for the Pack this week as they placed first and second out of Division II competitors for the women and men, respectively, at the Chile Pepper Cross Country Festival in Fayetteville, Ark.

The women’s team took first place out of 40 teams in the Division II section at the invite, putting up a time of 1:29:30 in the women’s 5k, to best their next closest competitor, Southwest Baptist, by 10 points with a score of 80.

Bailey Hughes led the ladies with the third best time in the division at 17:31.6, with teammate Miriam Roberts finishing on her heels in fourth place at 17:32.

Jordan Mathes also had a top-10 finish for the Pack, taking home 9th place with a time of 17:41.9 to give the Pack three of the events top-10 Division II finishers.

Despite not winning the event, the Pack put forth one of their strongest showings of the season, not only placing 2nd for D-II but 3rd overall, losing out to only the Orediggers and the meet’s host, University of Arkansas, a Division I university ranked No. 5 in D-I for cross country.

Following this meet, the Pack currently has at least one first place finish between the men and women’s teams in every meet that cross country has competed in this season.

The meet was the last warmup for the team before the RMAC Championships, set for Oct. 22 in Spearfish, S.D. hosted by Black Hills State University.

With the in-conference portion of their schedule in full-swing, the Pack’s volleyball team went 1-1 against league opponents MSU-Denver and UCCS to bring their conference record to 4-2.

After a 0-3 set loss to MSU-Denver, the Pack followed up with a hard-fought 3-2 victory over UCCS on the road in Colorado Springs.

The Pack was led by a record-setting performance by Katie Burnett, who set a school record with 35 digs to break Tessa Accomasso’s record of 34, set on Oct. 3, 2003.

The ThunderWolves had 86 digs as a team in the match, while senior Mariangel Perez and junior Elena Michalski each recorded double-double’s to help lead the Pack to victory.

The ladies will have two more road games on their four-game swing, facing off against Colorado Mesa and Western state, before a four-game homestand against UCCS, Metro State, Regis and Chadron State.

The men’s soccer team dropped both games this week to RMAC foes UCCS and MSU-Denver, by a combined score of 6-2, including five goals allowed to No. 21 ranked MSU-Denver.

The losses bring the Pack’s record to 3-7, with a 1-5 record in the conference following seven losses in their last eight games.

The Pack will have to get things together quickly if there’s any hope of making the postseason with just eight conference games left before the RMAC tournament begins.

Their next game comes Friday, Oct. 7, on the road against Fort Lewis.

The Pack was led by junior Neil Tillman who finished sixth overall, shooting 31-over-par through 54 holes to capture his third top-10 finish of the season for the Pack.

The Pack’s fifth place finish was the leading finish of all the RMAC participants in the tournament, as well as their second top-5 tournament finish in the 2016-17 season.

CSU-Pueblo’s next tournament appearance for the men will come during the RMAC West Tournament on Oct. 11-12, at the Tierra Rado Golf Course in Grand Junction.

Opportunities available for veterans looking to start own business