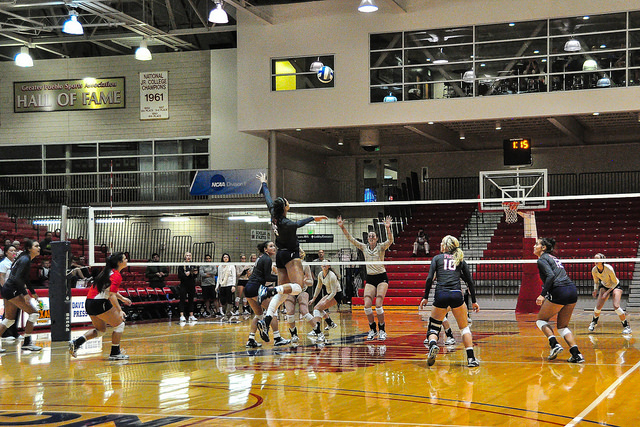 Last week was homecoming week here at CSU-Pueblo, and appropriately, Pack sports brought home excitement for students and fans during the seven-day stretch.

Record-wise, the Pack went just 3-4 on the week across the programs, but with university records broken, clashes between the Pack and nationally ranked opponents and a big win in the homecoming football game—all of which happened at home in front of the home fans—it was a good week to be a fan of Pack sports.

So let’s take a look at how it all shook out over the last week here in Pueblo.

The Pack women’s golf team ensured a strong finish to their fall season on Oct. 10-11, taking home their best overall team finish of the season with a fourth-place showing out of 13 teams in the RMAC South Tournament at Cattails Golf Course in Alamosa.

The ThunderWolves were led by Jacquelyn Porman who shot a 153 over the two-day tournament to finish with a +9 to earn a 4th place finish out of 68 student-athletes in the tournament.

Porman jumped 19 spots in the rankings from the first day to the second, shooting a tournament-best single round with a +1(73) on the second day.

The Pack showed out big time in their last tournament of the fall season and should have plenty to be excited for when they start again in the spring in 2017.

Ice shot an overall +1 (211) in the tournament, with his 14th overall finish giving him a fourth top-20 finish in five tournament appearances this year.

Junior Neil Tillman was also a big factor in the tournament, as he has been throughout the year, finishing 18th overall for his fourth top-20 finish of the season as well.

Ice, Tillman and the rest of the team will take the winter months off before gearing up for more golf come early spring when the Pack will tee-off once more during the spring season.

In their first meet of the season, the ThunderWolves’ swimming and diving team came up short in a matchup against Western State in their home-pool in Pueblo.

Freshman Phoebe Pontious captured her first victory for the ThunderWolves, winning the 50 freestyle with a blazing time of 25.26 in just her first collegiate swimming meet. Incredibly, Pontious’ time was the second fastest in school history, behind senior Carissa Gardella’s school record set in February of last year.

Despite some bright spots in the meet, the Mountaineers were too much to handle for the Pack, winning 10 of the meet’s 13 events for a combined score of 134-74.

The Pack will now hit the road for their next event on Oct. 22, taking on New Mexico State University in Las Cruces.

It was a tough week for the ThunderWolves’ women’s volleyball team, as the team dropped both of its contests and only won one set combined in the two matches against University of Colorado-Colorado Springs on Oct. 14, and No. 25 nationally ranked Metro State University Denver on Oct. 15.

The two-game stretch did have some highlights for the Pack, the biggest of which was senior Katie Burnett putting on a 24-dig performance against UCCS to become the university’s all-time career dig leader.

The two-game in-conference skid at Massari Arena brings CSU-Pueblo’s RMAC record to 5-5 on the year, putting them in a tie for 8th place in the RMAC standings with eight games remaining in conference play.

The Pack’s next game will come on Friday, as the second leg of its four-game home stand features appearances against Regis on Oct. 21, and Chadron State on Oct. 22.

The Pack’s men’s soccer team took on the No. 24 ranked Colorado Mesa on Oct. 14, losing a one-sided contest 4-0 at the Art & Lorraine Gonzales Soccer Stadium in Pueblo.

The Pack had the odds stacked against them in performing the upset from the get-go in the contest, and had their chances in the match reasonably vanish in the 8th minute when a red card put the team down a man when they already trail 2-0 in the game.

For their next contest, however, the Pack turned the one-sided tables in their favor in a match against Westminster on Senior Day, routing the Griffins 3-1.

The ThunderWolves’ record current stands at 6-8 overall, with a 4-6 record in the RMAC, as their next games come against South Dakota Mines and Regis with just four games left to play in the regular season.

The ThunderWolves football team finally got its overall record into positive territory over the weekend, manhandling the Fort Lewis Skyhawks 33-13 in the CSU-Pueblo homecoming game at the Neta and Eddie DeRose ThunderBowl.

The team did what they do best over the course of the contest, playing hard-nosed defense and taking care of the football on offense by limiting turnovers.

The Pack’s defense caused three turnovers on the day and held the Skyhawks to just 328 total offensive yards on the day.

A drawback of the game was a first quarter exit of junior running back Bernard McDondle, who would not return to the game and whose extent of the injury has yet to be seen.

Despite a slow start to the season, the Pack finds itself right in the middle of the intensely competitive RMAC, their 4-2 record putting them in a four-way tie for second place, behind a three-way tie for first place with three different RMAC teams sitting at 5-2.

The Pack now hits the road for the next two weeks, taking on Black Hills State University in Spearfish, South Dakota.

The Pack’s women’s soccer team made the most of its one match in the week, getting a 2-1 victory over New Mexico Highlands at the Art & Lorraine Gonzales Soccer Stadium.

After conceding an early goal in just the games 6th minute, the Pack rallied from behind with two goals from Laikyn Koss (20:04) and Sandra Grimaldo (76:55) to put the Pack ahead for the win.

The victory brings the Pack’s record to an impressive 9-3 overall, with their 6-2 record in the RMAC giving them the conference’s second best record behind Colorado Mines.

Their next game comes Friday against Colorado Mesa at home in Pueblo, and will give the ladies a chance to tie a mark set by the 2007 ThunderWolves with a seven-game win streak should they prevail.