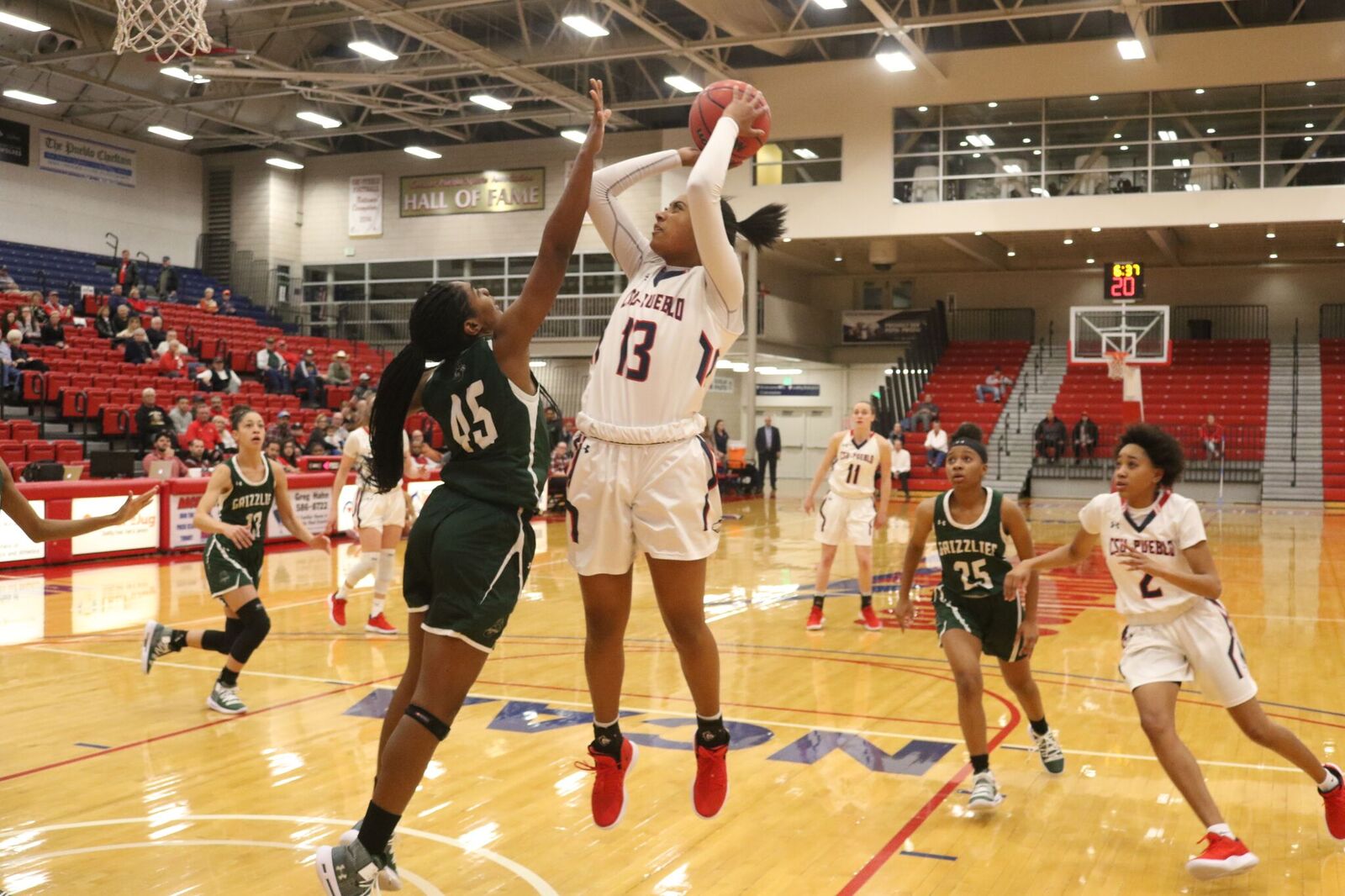 Thunderwolf guard Jennah Knafelc blocked Hollins’ previous 3-point attempt with 0:01 remaining in the fourth quarter. Hollins was able to retrieve her own blocked shot and score on a second attempt. However, a video review led officials to rule that Hollins’ toe was inside the 3-point line, making the final score 65-64.

Head coach Curtis Loyd said getting defensive stops made the difference between a win and a loss. The team totaled 11 steals, 6 blocks and 23 defensive rebounds.

Eight of those defensive rebounds came from Adams. “Our stops in a row really helped and our rebounding, especially from her,” Loyd said. “You know, if we get double-doubles every night from Khiya, it’s going to be really good for this team.”

The Pack opened the game with nine unanswered points, but an 8-4 run from Adams State’s Stephanie Ruiz put the Grizzlies within five points. The Thunderwolves maintained a lead until a free throw from Ruiz tied the game at 47 with 2:26 left in the third quarter. The Grizzlies took the lead with 1:19 left in the third after a fast-break layup by Madison Merschel.

The Thunderwolves regained the lead with 7:19 left in the fourth. “We stuck to the game plan and just played off that,” Davis said. According to Davis, the Thunderwolves caught on to the Grizzlies’ offensive scheme. Grizzly center Maddie Dorris served as a low-post threat, scoring 12 points.

“We knew the post was coming in,” Davis said. “She was going to bury us inside.”

Dorris’ inside presence was complemented by outside shooting attempts from Ruiz and Darias Whittington, according to Davis. “We should have stuck out on them more,” Davis said. “They shot in our face plenty of times, so we knew what they were doing.”

After their victory over the Grizzlies, the Thunderwolves are 2-0 against Rocky Mountain Athletic Conference opponents. With just four returning players from last season, the team makes a daily effort to build team chemistry, according to Loyd.

“In certain drills, we’re talking,” Loyd said. “In the passing drills, we make sure we’re calling names. So, were trying to do certain thing to really establish that relationship and that trust.”

Adams, one of the returning players, said team chemistry is also being built off the court. “We started off playing board games and card games,” Adams said. “…just sitting around and talking really helps with the cohesiveness on the court.”

The Pack plays their next home game tonight at 5:30 against Fort Lewis.

A pair of Walk-off wins and series sweep

The Cannon is “back in black”