HomeSportsWrestlers ready to make noise
Sports
9 years agoSports
1.3kviews
0shares
Winter brings snowfall and frigid temperatures outside, but inside, the CSU-Pueblo wrestling room temperatures are just starting to heat up.

The 2012-13 CSU-Pueblo wrestlers officially began practice on Oct. 10, though weight training and conditioning started the first week of classes, according to head coach Dax Charles.

Charles has his team poised to make a lot more noise this year and believes that the depth of the lineup that he has put together will help lead the team further.

“Our team is coming off its first winning dual season last year at 9-8,” Charles said. “I expect this team to perform better and make a bigger impact on the national level this year.”

The Pack features two wrestlers who are individually ranked according to the NCAA Coaches Association preseason rankings. Jesse Hillhouse, competing at 125 pounds, and Trevor Grant, competing at 165 pounds, are both ranked seventh in their respective weight classes to start the season.

Hillhouse will fill the team’s 125 pound slot, coming off an impressive season which he recorded a 36-6 record and finished second in the Rocky Mountain Athletic Conference tournament, earning him a bid to nationals.

At 133 pounds, the Pack has several athletes that will grapple for the starting spot. Among them is Pueblo native Tim Urenda, who just missed earning a berth to nationals last year. Competing with Urenda will be newcomers Adam Ortivez from La Veta, Colo., and Jacob Haney from Strasburg, Colo.

The 141 pounders feature a solid grouping of depth as well, with five-time University National Champion Jimmy Chase joining the Pack as a transfer from Division I Binghamton University. Competing with Chase will be Larry Schmueser, who is coming off his redshirt season, and junior Ryan Kirby.
149 pounds will feature Alaska native Nick Stahler.

“Stahler is a senior coming off his first winning season last year,” Charles said, “We have high expectations for Nick this year.”

One of the weights that will see heavy competition will be 157 pounds, according to Charles.
“157 is a wide open weight with several returners competing for the starting spot,” Charles said. Among those in the mix include sophomores Dalton Harrington and Jed Ferguson, senior Levi Jutila, and freshmen John Lewis and Jacob Lund.

At 165 pounds for the Pack will be the aforementioned Trevor Grant, who placed fourth in the RMAC tournament last year and earned a spot in the national tournament. In addition to qualifying for nationals, Grant was also a 2011 Academic All-American, an award given by the Division II Wrestling Coaches Association.

At 174 pounds, transfer Ray Hall will step in with an ability to make a big impact, according to Charles.

“Ray Hall is a junior college transfer that was a two-time All-American from Labette, Kan,” Charles said. “He has the potential to win a national championship for us this year.”

Senior Adam Carey looks to be the favorite to secure the 184 pound spot, though he will face competition from returners Matt Addington, Tim Long and Joe Giron.

197 pounds is another “wide open” spot according to Charles, as junior Bill Gray makes the cut from heavyweight to compete with Chris Frisbie and Joey Freeman for the starting spot.

Finally, another transfer seems set to fill the spot at heavyweight this year, as Niko Bogojevic comes in from Augsburg College in Minnesota as a sophomore.

“Niko will make a big impact for us this year and should be fun to watch,” Charles said.

Charles has been the head coach of the squad since the wrestling returned to the university in the 2008-09 season. This year’s team looks to be the one with the most promise thus far, with Hillhouse and Grant leading the way as returners, and Hall and Bogojevic transferring to add depth.

“I’m really excited about the team this year,” Charles said, “and I believe we have the kids this year to make a huge jump from our 33rd place finish at nationals last year.”

The Pack will begin the season on Nov. 1 with the intersquad dual meet at 7 p.m. in Massari Arena. 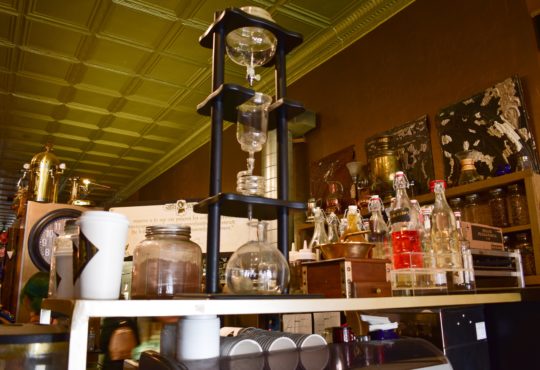 The price is worth the coffee