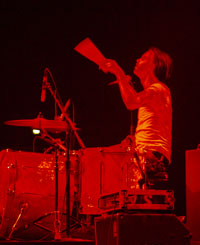 The house lights turn off, the stage lights flash like a strobe light as the crowd erupts in a roar for the band opening for 3OH!3, The Chain Gang of 1974.

Kamtin Mohager is known as a one-man-band, but he brings along Luke Osbourne and Brandon Anamier for his live sets to play bass guitar and drums.

Many in the audience rose up out of their seats as the group members grabbed their musical tools, which included a microphone, a bass guitar and drum sticks. The guitar riffs and drum beats sounded great despite the awful acoustics in the Colorado State Fair Events Center.

The trio played their instruments as Mohager took command of the stage. His stage presence resembled Mick Jagger of The Rolling Stones in his prime. He walked around the stage and rolled around on the ground. He wore a white, graphic T-shirt, skin-tight jeans and cowboy boots while doing so. His cowboy boots pounded the stage as he lay there, kicking and singing.

Halfway through the set, Mohager abandoned his microphone, approached his turntables and proceeded to spin some records. (Perhaps they were a pair of compact disc jockeys.) Regardless, they made up for the lack of instruments. 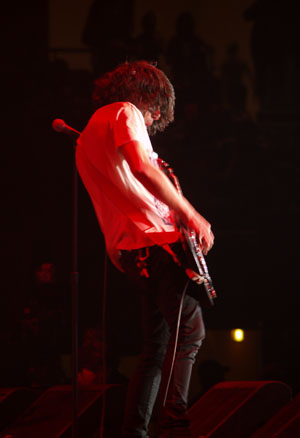 Mohager is diverse in his use of various instruments including the tambourine, the cow bell and miniature percussion set, which he played along with the drummer.

Orange, red, blue and white light shone down on the band as the bass guitarist jumped onto an amplifier and played the cowbell. Later, the drummer stood on his seat and pounded the drums with a lot of aggression, then returned to his chair and played with lightning-quick precision.

The crowd at the Events Center was pretty large, and the trio had great crowd control and participation, but this was not a new experience for the group.

Like many bands before them, The Chain Gang of 1974 has graced the stage of the Vans Warped Tour.

The audience chanted for 3OH!3 to come to the stage, their hands in the air, fingers splayed, the thumb and the first finger of each hand touching, making the popular sign for 3OH!3, as Sean Matthew Foreman and Nathaniel “Nat” Warren Seth Motte made their way to the stage. Mohager, of The Chain Gang of 1974, appeared on stage with the duo to play the bass guitar.

They were obviously not concerned with their appearance, having opted to wear their street clothes. Foreman wore a pair of skin-tight jeans with a tank-top resembling the American flag with the red and the blue switched. Motte had his hair in a ponytail and wore a faded blue T-shirt and skin-tight shorts. Both men wore Nike shoes with their outfits. 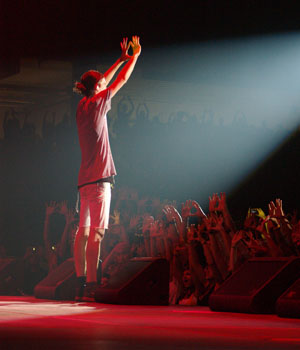 As the music blared through the speakers, a spotlight shone on Motte holding his hands up in the “303” sign, towering above the audience that mimicked him. Motte played  conductor and had great control over the audience. Later, when Motte asked the crowd, “How ya’ll feeling?” the crowd roared back at him.

3OH!3 used the energy from the crowd to catapult them into their recent hit called, “Starstrukk,” during which Foreman and Motte skipped from side-to-side together and resembled a synchronized swim team, but with better precision.

When Foreman talked to the audience, he asked if anyone liked the Colorado State University-Ft. Collins Rams. Boos echoed through the Events Center. He said 3OH!3 didn’t like the Rams either because both of the band members graduated from their in-state rival, University of Colorado at Boulder.

An audience member in the front row held up a fluorescent green sign that read, “It’s my birthday.” Her sign didn’t go unnoticed. 3OH!3 acknowledged her presence; they then asked how many of the audience members shared her birthday. The whole crowd cheered. Motte played with the crowd, using sound effects such as air horns and a gunshot.

Later, 3OH!3 performed “Dance With Me” which samples Joan Jett’s “I Love Rock N’ Roll.” The crowd went wild as Foreman performed and Motte sang the chorus with the crowd. In the mean time, hands continued to clap as different colors of lights shone on the duo and the crowd.

The drum machine wasn’t the only system that produced beats. 3OH!3 also used a computer to replace instruments that weren’t present. From the stands, it looked like 3OH!3 paid homage to Naughty by Nature’s, “Hip Hop Hooray,” as the audience members were told to move their hands from side-to-side in the air.

Throughout the set, two inner rock stars were unleashed in the stand. Anna Armstrong, daughter of clinical instructor at Colorado State University-Pueblo Rosanna Armstrong, and her friend, Vince DeShong, were two audience members who appeared to be having the time of their lives at the concert. They sang each song word-for-word and danced like there was no tomorrow.

As the two fans were singing and dancing in the stands, the other duo, Motte and Foreman, broke out into another synchronized dance sequence; this time they shimmied and the crowd loved it.

As the song came to an end, Motte walked off the stage and behind the curtains, followed by Foreman and Mohager. The audience began to chant, “3OH!3! 3OH!3! 3OH!3!”

The band returned to the stage to perform their last song, “Don’t Trust Me,” which is their platinum single.

3OH!3 can be Pueblo’s area code any day of the week, even if it is for just one night.

Students compete for top prizes at CSU-Pueblo’s Got Talent