EDITOR’S NOTE: The following interview was conducted back stage, before the 3OH!3 concert at the Colorado State Fair. The music in the background of the last half of the interview is The Chain Gang of 1974 conducting their sound check.

Q: To those out there in Internet land, that don’t know who you are, please introduce yourselves to the folks out there.
Nat:  My name is Nathaniel Motte.
Sean:  And my name is Sean and we’re a group called, 3OH!3, based in Colorado.

Q: How are you are both doing today?
Nat:  We’re doing well.
Sean:  We’re doing excellent, man. We’ve got an excellent drive up here with the A/C wasn’t working in the van that we drove. So, all the windows open taking in the nice Colorado air. So, it was nice, man. …it’s a beautiful drive, you know. So, it’s a nice way to come down.

Q: Are you excited to be performing tonight at the Colorado State Fair?
Nat: I am—yeah. The last time we played Pueblo was at a Sweet Sixteen party. So, it will be a little bit different today. I’m excited. It’s a cool space. There is a lot of speakers and stuff. It ought to be fun, man.

Q: Where in Colorado would you like to perform that you haven’t performed already?
Sean:  We performed actually–.
Nat:  We haven’t played Red Rocks. The big stage at Red Rocks would be pretty amazing.
Sean:  Red Rocks would be amazing. We played at Breckenridge and that area and so that’s a space that we’ve played. I know actually a lot of people who have been twittering me and telling me to go to Grand Junction. That might be interesting to play there.

Q: Every artist has their humble beginnings, how did you get your start? 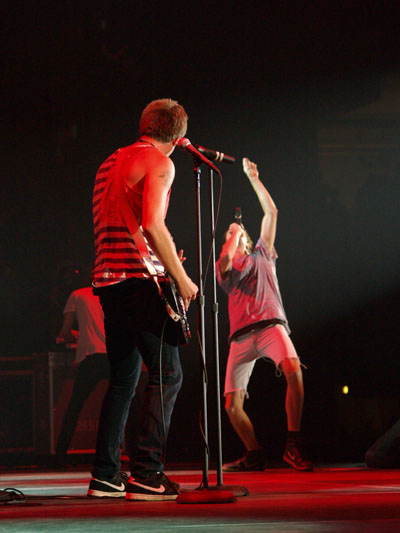 Nat:  We got our start—let’s see. Our first shows were at house parties.
Sean:  Yeah–We played at house parties and we kind of took shows as they came. We opened a lot of shows. The Marquis in Denver for like whatever. We kind of opened for anyone from Fat Lip, from The Pharcyde, to like metal bands. So we just did whatever we could to could to get out there and have fun and push the music we did forward. It definitely took a little bit of work. It’s not like every show is a success. We’ve had a good time doing it. That is kind of the story of that.

Q: What is the story behind your current hit, “Don’t Trust Me?”
Nat:  We were actually in the studio. We had met up with a friend, Benny Blanco, a producer. A fellow beat maker. He and I just got in there. I think it was late one night and started making a beat. Concurrently, Sean started writing the verses. It was the beginning of our writing process. We just wanted to make a song that was fun and catchy. A little different, electro-sound—Nat drifts off.

Q: In the last couple of years, the Colorado music scene has burst onto the international scene including:  OneRepublic, The Fray, Flobots, and now 3OH!3. Have you ever thought about collaborating with these acts on future projects?
Sean:  I’ve thought about it. I think The Fray—I think they write incredible songs. Whenever I hear a song that The Fray does; it is undeniably catchy and poppy. I think it would be fun to work with them. OneRepublic, obviously, they have a lot of talent. It is not just the song “Apologize”—that they have a lot of talent. I guess they’re in the studio right now. That songwriter does a lot of writing for other artists and stuff like that. I’m thinking there’s gonna be a point in the future where maybe we’ll make the “Colorado Super Team” and we’ll all get together and write something. Write a song or an album—that would be cool.

Q: OneRepublic has linked up with hit-maker, Timbaland, in the past. Which music producer in the industry would you both like to work with that you haven’t worked with already?
Nat:  I would love to work with Justin Timberlake. He’s not necessarily a producer.
Sean:  Greg Kurstin.
Nat:  Greg Kurstin is an awesome producer. He did the Lily Allen record. He’s done some cool electro-stuff. The best thing about working with different producers (with us being producers as well) you learn so much. You see other people’s ways of doing it and you can incorporate it into your own.
Sean:  Steal it.
Nat:  Yeah–steal it.

Q: You two are everywhere including radio and television, what were your reactions when you heard your song being played on the radio for the first time?
Sean:  It was crazy. You grow up here—listening to the radio and falling asleep with the radio—just driving in your car and realizing.
You almost want to roll down the windows and yell at the other car and be like, “Yo! I’m on the radio.”
It’s really cool. Then after the millionth time—you just want to break your radio. No—just jokin’. It’s awesome. Being from the hometown and hearing it there—it’s so humbling. It’s really cool.

Q: How did you both react when you saw yourselves performing on television for the first time?
Nat:  I was kind of weirded out, honestly.
Sean:  Am I that fat? I thought I looked smaller.
Nat:  Initially, there is kind of an awkwardness. It is just like hearing your voice. It’s cool and at the same time, it really surreal. It’s amazing. Like Sean said, “It’s humbling.” There have been a lot of people exposed to the art and the music we make and the fun you’re having. It’s cool. It’s different.

Q: You’ve been on “late night” television shows, MTV, and other programming on television and cable promoting yourselves. What was your favorite performance?
Sean:  Our favorite performance—
Nat:  Like a television performance—
Sean:  I think MTV’s Spring Break was really cool.
Nat:  <Laughing>
Sean:  We’ve never been to like a “Spring Break”–Like a formal “Spring Break” or whatever. Obviously, tons of students go. We went to C-U.
Nat:  We went crowd surfing with inner tubes on.
Sean:  Yeah, it was just fun. I mean—we’ve never been down there. There are a lot of dudes with their shirts off, drunk chicks and stuff like that. The crowd was massive. It was a great show and I think the performance came across very well on TV. Which was kind of unusual sometimes—it is hard to capture that performance. I think that was my favorite.
Nat:  Me too.

Q: You are on heavy rotation on the radio and television, and have been on national tours with big names. Who are your favorite acts that you have toured with?
Nat:  We love touring with our friends in a band called, InnerPartySystem. We actually toured with in the fall. They were just on the Warped Tour too. Great guys; super, super-good  band. They are producers themselves and we learned a lot from them. It was great touring on this year’s Warped Tour with a lot of old-school, punk acts:  NOFX and Bad Religion. Bands like that have been hustling for over 20 years. It’s inspiring as musicians.

Q: Every artist has a “demands list” when they tour, what is a must have in your dressing rooms?
Sean:  I think we figured it out actually. We actually played in London and we didn’t send our writer over–which is the “demand list.” There was just water.
We were like, “Okay.”
All we need—people were asking, “What do you need? Do you want food?”
We were like, “No, we don’t need food.”
They were like, “What do you want?”
We’re like, “We just need whiskey.”
So whiskey and water—and I think we’re pretty happy campers. I don’t know if we’d survive off anything else. That’s all we need.

Q: I noticed you performed at this year’s “Mile High Music Festival.” What was it like to be on the same bill with all of those artists?
Nat: It was great. It was a little bit surreal for us. We were on the Warped Tour and so we flew in the day before. It was an in and out thing. It was cool. It was great to see the Denver area and Colorado have a legit summer festival. There are so many others. It was great. It ended up being a great show. We really didn’t know what to expect. We were in a huge tent. It was completely full. That was awesome too.

Q: What is the energy like when you both have the crowd singing your songs alongside with you?
Sean:  It’s great. It makes my job easier. I don’t have to sing any of them. I just put the microphone out there. No—it’s cool. It’s just weird that you can write something on a piece of paper and then you can have a thousand people singing it—like a year down the road. Obviously, every time that happens—I just get a big grin on my face. I’m an idiot about it. I just jump around with a big grin. I think it’s amazing.