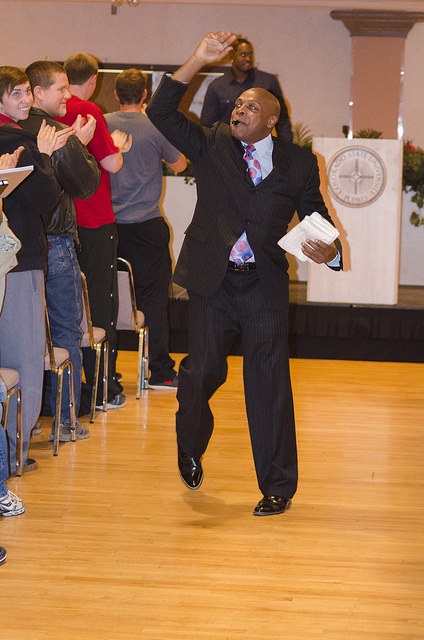 Coach Ken Carter’s presentation for the Distinguished Speaker Series at Colorado State University-Pueblo drew more than 750 attendees to the Occhiato University Center Tuesday night. Carter delivered a powerful, interactive program to his audience about motivation and success using the real-life situations that he overcame growing up.

Carter was introduced by former CSU-Pueblo student-athlete Kevin Coates, who graduated in 2012. Coates shared a little about his hardships and compared his life to some of Carter’s former basketball players.

“It’s never about how you started, it’s all about how you finish,” Coates said as he introduced Carter to loud applause from the crowd.

“All the people in this room today, this is called the ‘Coach Carter Experience.’ When you leave here, you will not be the same,” Carter began.

Carter used real-life examples to show how he has helped individuals reach their highest potential.

About his experience coaching at Richmond High School, Carter explained how Richmond, at the time, was considered the most dangerous city in the state of California.

“Fifty percent of our student-athletes never ever graduated. You were 80 times more likely to go to jail than you were to go to college unless you played for Coach Carter,” he said.

CSU-Pueblo student Joseph Rosenbrock, a junior mathematics major, said the event was not what he expected.

“I honestly thought he was going to stand up there, tell his whole story and summarize the movie,” Rosenbrock said.

According to Rosenbrock, Carter did not go that direction at all. Instead, he gave more valuable life lessons than just his experiences. He encouraged success and showed how to achieve it by overcoming hard situations and setting goals.

“I have a 100 percent graduation rate, and every senior who has ever played for me has gone on to college. I’m really proud of that,” Carter said.

“And on the way, we were able to win a few basketball games and get a movie made,” Carter said, getting a laugh from his audience.

“He really cares about having personality and was able to engage the whole audience,” said Doug Watterson, a junior economics and finance major.

“He was very funny and had a lot of good words to say. He was very enthusiastic, joking around, but was also serious. It was good,” said junior Jake Ludwick. “He really inspired me. I learned to take opportunities that are given to me.”

“I liked that he said to write down your goals because they won’t come true unless you write them down. Otherwise you will forget them,” Rosenbrock said.

“I liked how he described coaching a girls’ basketball team. Basically, the underlying message that you have to be able to connect with the group you’re working with,” Watterson said. “He’s able to walk up to anyone or any team, his team and tailor his personality to fit the situation, which makes him dynamic as a person. I will definitely try to repeat that and shoot for it for myself.”

As the event came to an end, Carter told the audience to stand and to raise both hands high.

“I want you take your right hand and put it over your heart. Now I want you turn 360 degrees all the way around,” Carter said. “Now you can put down your hands.”

“Now, when anybody asks you ‘how was Coach Carter’s presentation here at P-town?’ this is what I want you to tell them: ‘He made me rise to my feet, raise both of my hands, he touched my heart and he turned me around,’” Carter said, and the crowd erupted into applause.

The event ended with a short question and answer session with Carter and a meet and greet outside the ballroom. Attendees took photos, got autographs and were able to purchase merchandise including t-shirts, Audiobooks and the “Coach Carter” movie starring Samuel L. Jackson.

Walking to a healthier, happier me

CSU-Pueblo and Goodwill team up to provide joy for children