A recent survey taken by 21 random people at CSU-Pueblo about marijuana use and legalization reveals some student’s positions. 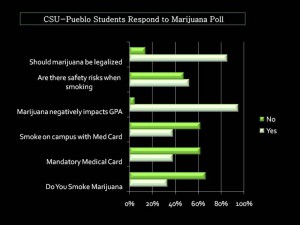 About half of the participants said there are safety risks other than a low GPA associated with smoking. The safety risks listed by the students included lung damage, driving under the influence and killing brain cells. Some said the only hazards were becoming tired and lazy.

My space or yours?