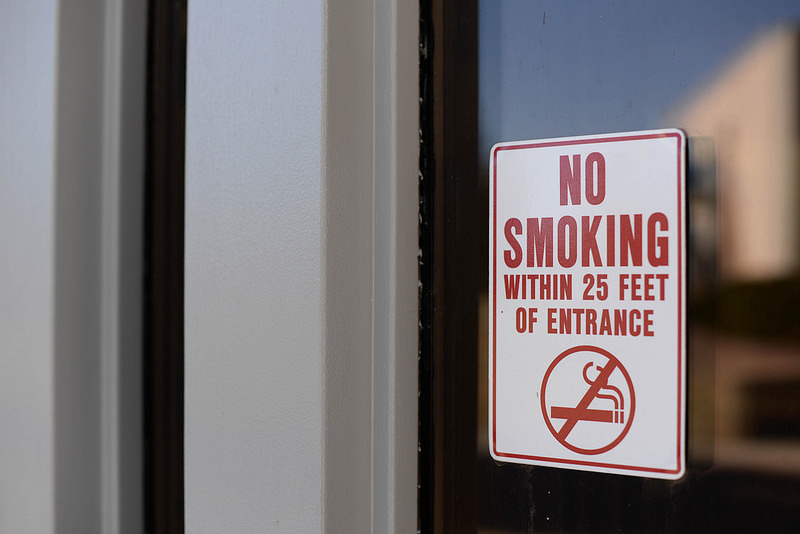 by the CSU-Pueblo Today

Like a cartoon cloud that anthropomorphizes itself into a menacing skull, clouds of smoke choke students as they attempt to safely travel between their lecture rooms. Second hand smoke permeating their pristine bronchi, the oblivious victims walk through the napalm of their negligent offenders as they puff away at their obsession. A forced assault on their respiratory system that over time, could prove deadly. Put simply, if students want to get to their classes, they are going to have to breath in lungs-full of the toxic smog. It is Colorado State University-Pueblo’s responsibility to protect its students and enforce the smoking policies laid out in its bylaws.

Smoking on campus is becoming a major concern for CSU-Pueblo students. There is no way to navigate the campus while completely avoiding the smokers. Neither should the responsibility fall on the shoulders of the large majority of non-smoking students to divert their paths in avoidance. Furthermore, the cigarette butts are piling up in common areas including the cafe. It degrades the campus grounds and it is against the law to litter in the state of Colorado.

Thirty percent of all college students smoke in some capacity according to a recent Harvard study. It’s a staggering number considering the voluminous research warning of the hazards of doing so. There’s even labels on the package, in case it went unnoticed. Second hand smoke is responsible for 41,000 deaths a year per the American Lung Association. Contained in the exhale of smokers are deadly chemicals, including formaldehyde and arsenic.

“Cigarette smoking is a huge way of disrespecting the people around you.” claims Ryan Champagne, CSU-Pueblo student.

The bylaws are clearly laid out in the Pack Guide which states that smoking is prohibited in all campus buildings, in campus-owned properties, in campus-leases and in campus-owned vehicles. This includes e-cigarettes. Smoking is permitted outside University facilities only if it is 25 feet away from all building perimeters. This is not nearly far enough.

“I think it needs to be more enforced” says Jessikah Campbell, another CSU-Pueblo student.

When the CSU-Pueblo Today visited the Security/Police Campus office we were told that it is campus policy and should be posted at every entrance. However, upon further investigation it was discovered that there are no signs to make students aware of any such policy. Campus police were unavailable for interviews.

The CSU-Pueblo Today went around campus picking up and tallying every third cigarette butt we found. We accrued a bounty of 253 butts by walking the perimeter of the campus. This did not include the grass areas. With thousands of cigarette butts lying around campus, the ball is being dropped and it is the administration’s responsibility to pick it up.

The public smoking bans throughout the world are evidence that change is needed. A TIME magazine study recently concluded that respiratory issues in food and beverage industry workers were significantly reduced in cities that banned smoking in bars and restaurants. Cardiovascular emergency visits were down also. The effect of second hand smoke is well documented and in an enclosed area it can be quite menacing. But even outdoors, smoke can have lingering effects and over time the danger of negative effects from exposure increases.

“There is no risk-free level of exposure to second hand smoke.” The US Surgeon General said in 2006.

Do the students of a university not deserve to be protected by the institution? The dangerous effects of smoking and secondhand smoke are not debatable. Putting unwitting students in harm’s way is negligent at best, if not complicit. When a person’s right to breath non-toxic air is trampled by another person’s personal freedoms, those personal freedoms need to be examined.

Smoking areas need to be clear of foot traffic and better disposal methods are a necessity. Larger signs need to be put up throughout campus. Students that don’t comply to the regulations need to be ticketed, after an initial warning. Most of all it requires enforcement of all guidelines from campus police.