Rockstar energy drink’s Get a Life tour came to Pueblo last Thursday, bringing some new and popular rock talent on stage.The tour kicked off in Las Cruces, New Mexico, Dan Whitesides, drummer of The Used said during a phone interview prior to the concert.

“This is an all-college tour. We are mainly touring a lot of the small colleges,” Whitesides said. “We want to go to places we haven’t been before or where a lot of big names don’t go. We wanted to give attention to the places that don’t usually get any and give them an opportunity to hear good music.”

Lights Resolve opened the stage to get the evening started. This three-member band from New York gave the audience a taste of their indie-rock mix of music.

With a slightly different sound, the hard core rock band from Los Angeles followed. Playing a variety of percussion instruments, Street Drum Corps rocked the stage with their heavy beats and lyrics.

The band got the crowd going as people on the floor began pushing and crowding towards the stage.

“Street Drum Corps got everyone worked up,” concert-goer Brian Wilson said. “I even saw a few fights and security cut in and took a few people away. It was pretty wild.”

To bring the energy level down, Army of Me came on stage with their indie-rock style music.

“We’ve played with Army of Me before,” Whitesides said. “We think the crowd will like them. They have a different sound than us, but that’s what makes this tour awesome. There are a lot of different types of music.”

The audience, however, did not appear to feel the same.

Army of Me was met with flying objects, booing from the crowd, people shouting obscenities and others thrusting their middle fingers high in the air at them. Although the band finished their set, they quickly walked off stage without looking very pleased.

“People shouldn’t come to a concert if they don’t want to hear different kinds of music,” Kristin Pacheco, CSU-Pueblo student said in reaction to the audience’s attitude towards the band. “If you don’t like the band on stage then leave the floor. You shouldn’t disrespect them.”

Following Army of Me, indie band Straylight Run came on stage. Although the band was better received by the crowd, they seemed nervous on stage.

“I would be nervous too if I was them,” Jeff Hawkins, CSU-Pueblo student said. “I wouldn’t want to go out there if people were throwing stuff at the band who went before me.”

Despite their apparent nerves, Straylight Run pulled off their set with few problems and pumped up the crowd for the next band.

Headlining the concert was rock band, The Used. Singing songs from all of their albums, the band hoped to give fans a change from previous concerts.

“This time we are bringing cardboard cutouts of politicians, law enforcement and military as props on stage,” Whitesides said. “We aren’t really trying to make a political statement, but in light of what’s going on in the world these days it seems appropriate to let our fans know we have a take on it.”

Pulling fans from the floor to dance with them, lead singer Bert McCracken rocked the crowd.

“I saw some girls throw their bras onstage and people were crowd surfing and moshing. They put on a really good show,” concert-goer April Mendosa said.

Despite the excitement of the audience, security was on full alert as a number of fans tried crowd surfing to cross the barrier to get on stage.

“It doesn’t really bother us when people try to rush the stage,” guitarist Quinn Allman said. “They are just fans who want to be close to us. It’s cool.”

Overall, the members of The Used agreed the concert went well.

“We had a good time here, and we’re looking forward to the rest of the tour,” Allman said. “It sucks some of the other bands met some disrespect, but for us it was a good experience.” 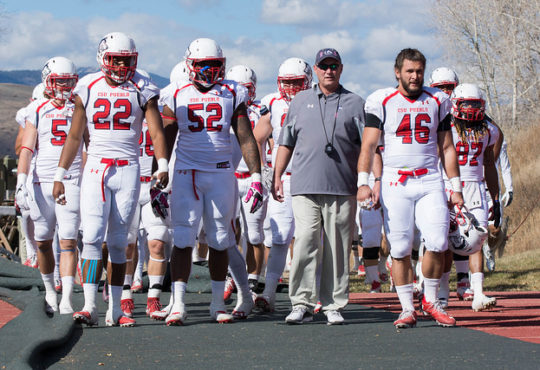 Career Fair offers applicants a chance to meet with employers