Every year, Oct. 31 marks a day when people dress up to impress, scare and tantalize. But Halloween is a holiday rich with history and
meaning.

It is believed that Halloween originates from a Celtic tradition called Samhain, pronounced sow-in, according to history.com.

The Celts, who inhabited modern-day Ireland, celebrated Samhain as what we would consider New Year’s Eve. They celebrated the beginning of their calendar year Nov. 1. It marked the end of the harvest season.

The Celts associated the winter season with human death so the morbidity aspect of the Halloween celebration is no coincidence. The night of Oct. 31, the Celts believed the dead returned to Earth and the boundaries of the living and dead were blurred.

Their belief that spirits walked the Earth also meant the Celtic priests could more easily predict the future, which they relied on for
next year’s crops.

Sacrifices and bonfires were made that night and the Celts wore costumes.  Unlike the costumes of today, like sexy cops and cheerleaders, the Celts wore animal carcasses and skins to ward off roaming spirits.

Halloween in the U.S. 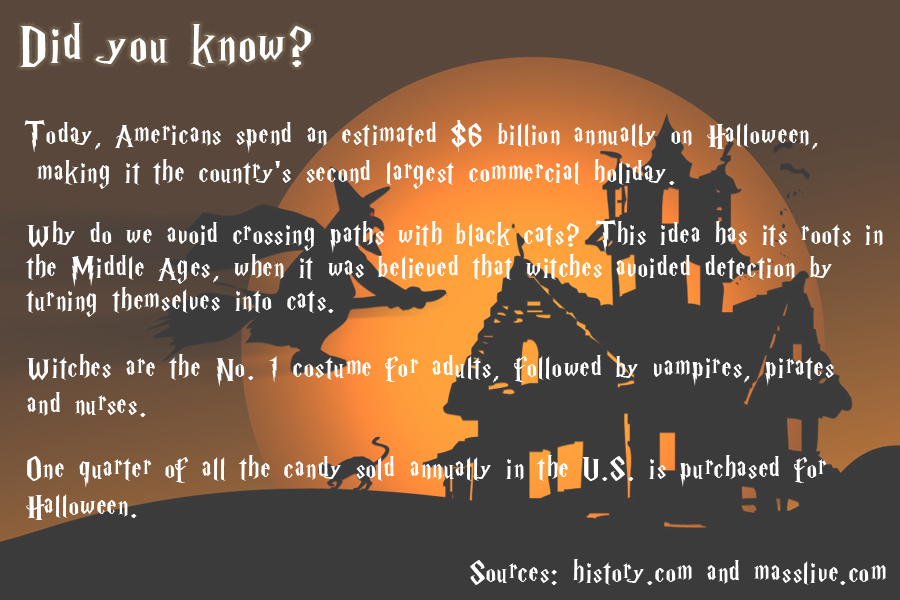 If it’s hard to imagine the stiff Protestants in New England celebrating Halloween, it’s because they didn’t, the pagan-rooted holiday was
not widely recognized.

However, in the southern colonies of the new world, as the European immigrant and Native American cultures began to slowly combine, an American version of Halloween began to form.

Those early celebrations included “play parties.” These parties were essentially public events held to celebrate the harvest. Neighbors
would share stories of the dead, tell each other’s fortunes, dance and sing. They were full of mischief and ghost stories, according to history.com.

By the mid-1800s, autumn celebrations were common but Halloween was not yet celebrated across the country.

With the flood of new immigrants to America in the second half of the 19th century, particularly those from Ireland, Halloween
began to look much like it is today. The Irish and English incorporated their traditions, which included donning costumes and going from house to house asking for food and goodies.

Then at the tail end of the 1800s, Halloween became a community-oriented event with parties at city halls and parades, as opposed to
the night time festivities. It was in the 1950s that Halloween re-emerged as a  night time holiday for trick-or-treating.

Consider performing a trick to be able to see your future husband? Most women wouldn’t take part in such nonsense today but in the late 1800s, on Halloween night, young colonial women thought they could conjure the image of their future husband with a trick using yarn, apples or mirrors.

In the 1950s, American community members gave neighborhood kids treats as a deterrent for vandalism and mischief. Back then, the treats prevented the tricks.

But, again, the Celts were on the forefront of the modern-Halloween celebration. The Celts left food and lit candles in hopes that
the spirits roaming the earth would find their way back to the realm of the dead. Modern Halloween night “trick-or-treating” is believed to date back to the early All Souls’ Day parades in England.

All Souls Day is a Roman Catholic holiday where feasts and masses commemorate those who have died and are now in Purgatory. The spirits await entry into heaven as they attempt to cleanse their sins, according newadvent.org

As part of the festivities, families would gather food and treats to give to the poor. One such treat was a “soul cake.” The cake was given in return for a promise to pray for the family’s dead loved ones. The poor prayed for the dead and in turn were able to eat.

At that time, it was called “going-a-souling.” The church encouraged the act as a way to stop the archaic tradition of leaving food for
roaming spirits, according to history.com.

Over time, the tradition found its way to children who went door to door asking for ale, food, and money.

Every time an American carves into a pumpkin in celebration of Halloween, they are honoring “Stingy Jack.,” but who is he?

According to Irish folklore, Stingy Jack invited the devil to drink with him. Staying true to his name, Jack refused to pay for
the devil and instead asked him to turn into a coin to pay for both drinks. Instead of paying, Jack turned the coin into a cross necklace and began wearing it.

The devil begged Jack to set hi,m free, Soon, he bargained with the devil and in return for setting him free, the devil could not claim his soul after his death. The devil agreed and Jack set him free.

When Stingy Jack died, God denied him entry into Heaven, being that he had been a mischievous and cheap man all his life. Staying true to his word, the devil did not allow Jack into hell either.

The devil did, however, give Jack a burning piece of coal to light his way in the dark he was banished to. Jack put the coal into a turnip
and used it as a lantern. On Halloween, Jack’s spirit and his lantern could be seen roaming the earth, according to the tale. So his name changed from Stingy Jack to Jack of the Lantern, and eventually Jack-o-Lantern.

Originally, Jack-o-lanterns were made of turnips and potatoes in Ireland, and of beats in England. When the European immigrants came to America, and found the pumpkin, a vegetable native to the continent, they began to use the larger canvas for their spooky carvings, according to history.com.

Happy carving, costuming and most of all, Happy Halloween!