Editor’s Note: The following interview was conducted prior to Meyer’s retirement Friday. CSU-Pueblo TODAY thanks Meyer for his services to this university and contributions to this publication, and wishes him the best in his pursuits.

Painted porcelain plates line the wood shelf next to a large oak desk, and scores of wall paintings, knickknacks and framed family photos he collected over the years are scattered everywhere.

A coffee pot takes up residence alongside the leather sofas and chairs in the back of the room, and books and technical manuals fill the shelves. Because it employs all the comforts of home, the office of the provost of CSU-Pueblo reflects the personality of its occupant instead of resembling a place of business.

At that moment Russ Meyer, who is the provost for CSU-Pueblo, entered the room.

“Hello, it’s good to see you,” Meyer said with a smile. “How are you doing today?”

Sporting a wheat color blazer, and multi-colored bow tie, Meyer chatted about the weather as he poured a cup of coffee and lowered himself into a chair in front of a long conference room table. As he sipped his coffee, he looked around the room and shook his head. It seemed like only yesterday he arrived at a time the university needed an academic facelift if it hoped to earn community support, he said.

Since then, Meyer has served as a college dean, interim provost, vice president for academic affairs and chief academic officer, seen the university change its name and watched enrollment soar.

“Where has the time gone?” Meyer asked, shaking his head.

At that moment Barbara Painter, his administrative assistant, entered the office. Meyer exchanged a few words with Painter, nodded his head and thanked her as she left the room.

“Barb takes care of me, and when she speaks, I listen,” Meyer said, laughing.” Now it’s my turn to talk. What do you want to know?”
Indeed, the campus’ number two man was in a talkative mood as he reflected on his time as provost, retirement and serving as an educator for more than 40 years.

Meyer placed his coffee cup on the table and laughed as he recalled how the U.S. Army indirectly played a role in his pursuing an education career.

Meyer was working for a clothing company when he received his draft notice, he said. Determined to keep his employee from going into the Army, Meyers’ supervisor asked an Army general if there was something he could do to keep Meyer from having to serve in the Vietnam War.

The general offered an alternative Meyer turned down, he said.

“The general said, “I can’t get you out of the war, but I can get you a one year delay if you want it,” Meyer said. “I said,’Thanks, but no thanks. A year won’t make any difference, so I’ll go now.’”

As it turned out, Meyer was assigned administrative duties, and therefore didn’t see any war action during his two years of service, he said.
To help pass the time, Meyer read the works of William Shakespeare and other literary classics, he said. His love for the English language grew, and before long he realized he wanted a career in education.

Meyer quickly discovered USC was unlike any university he had experienced. At the time USC had a poor marketing and recruiting program, he said, and enrollment and morale was at an all-time low. Because of this, people knew little about the campus and what it had to offer the community, he said. In fact, USC was so unpopular people referred to it as “University of Second Choice.”

This perception disturbed Meyer because he believed USC could be the kind of university student’s dream of attending. Changes had to be made immediately if the university hoped to survive, Meyer said.

Barbara Montgomery-Ratcliff, former provost for USC, suggested changing the name to give the university a fresh start and enhance community connection, Meyer said. The university then added a recreation center, and football, wrestling, and track and field programs, he said.

Next, CSU-Pueblo adopted aggressive recruiting and marketing programs, Meyer said. Additionally, work study positions and scholarship programs were offered, all of which helped CSU-Pueblo become an influential institution of higher learning, he said.

“Because of Joe, the university has seen great enrollment gains,” Meyer said. “The quality of the institution has improved both in students and faculty. In fact, enrollment probably is Joe’s greatest achievement as president of CSU-Pueblo.”

Leaning back in his chair, Meyer recalled when he first experienced a connection with Garcia.

“One day at a board meeting, Joe said to me, ‘Let’s go for everything,’” Meyer said. “I asked, ‘What happens if we don’t get them?’ Joe replied, ‘We’ll both get other jobs, won’t we?’ That’s when I realized I didn’t want to be here if the university didn’t go after the things it wanted.”

Rumors also have been a problem, Meyer said, and the latest rumor involves paying backing the Pell grant, a federal grant the government provides to students from low-income families who need to pay for books, tuitions and other expenses. The Pell grant is awarded to students based on financial need information provided on their Free Application for Federal Student Aid form.

Unlike loans, grants to not have to be repaid, Meyer said. Yet, for some reason, students believe they must pay the money back to the university, he said. Meyer doesn’t know how this rumor got started, he said.

“Students do not have to pay back the Pell grant because it is a grant, not a loan,” Meyer said as he sipped his coffee. “I have heard the same rumor and I assure you it is not true.”

Also, people assume the university is withholding money earmarked for improving programs and operations, Meyer said. Even people who get paid to crunch numbers assume money is being held back, he said. This too is a rumor, Meyer said, because the future of the university depends on what happens to funding in the state.

“I see no reason why anybody in the administration would hold money back rather than let the university do the job,” Meyer said. “The money we collect is used to run the university. It would be foolish to withhold funds when in fact that is what makes the university work.”

People believe some colleges and universities in the state should be closed to save money, Meyer said, but that such a move could prove disastrous to institutions of higher learning.

“If we do that, we will deny access to hundreds, perhaps thousands of people, and will lose the revenue from students who go to these schools,” Meyer said. “This university, Adams State and all the community colleges have an access mission, and bringing education to the people is what we’re about.

“However, I think what has changed is that in higher education is that it is not properly funded throughout the nation. There seems not to be recognition that higher education benefits society. That’s a major problem in Colorado, and it is more of a problem in this state than anywhere else.”

Meyer pauses, adjusts his bow tie and smiles as he reflects on his accomplishments at CSU-Pueblo. He has many, he said, but believes working with good people and building a polished academic affairs team is his greatest success.

In fact, Painter described her boss as a people-oriented person who values everyone’s opinion and contribution.

“The best thing about working with Russ is his contagious sense of humor and sincerity,” Painter said. “He is not only my supervisor, but a mentor. He encourages me in all aspects of my career from professional development to community involvement.”

William Folkestad, who chairs the university’s art department, said he enjoys Meyer’s promptness when assisting him with questions and problem-solving.

“I have appreciated his efforts easing the technological needs of the department of art, and his support of my colleagues’ research and creative endeavors,” Folkestad said. “From prior experience at other institutions, his accessibility has been a very welcome discovery that has facilitated our professional relationship during my first year at Pueblo.”

Skye Lown, who is an administrative assistant, said Meyer appreciates people and their work.

“Russ is always very appreciative of your work and considerate in understanding what is important to you. It is an honor to work for him,” Lown said.

“Katie Velarde, who is the registrar for CSU-Pueblo, said Meyer has been a role model and a friend since the day they met.
“He cares about each student that sets foot on this campus,” Velarde said, “and I appreciate all he has done for this great institution.”
However, Meyer sees himself as an average guy doing the best job possible for an extraordinary university, he said.

“You’ve got to be thinking there are always things that got to be solved, and my job is finding solutions to problems,” Meyer said as he finished his coffee.

Soon, Meyer’s only problem will be in how to spend his free time. He might write another book having written several during his career, he said. Meyer doesn’t fish or hunt wild game, he said, and he gave up golf when he was 22.

“I couldn’t see continuing with a sport that made me angry every minute I was there,” Meyer said, laughing.

For now Meyer wants to spend as much time as possible with Helga, his wife of 43 years, their children Geoff and Hillary, and three grandchildren. He also wants to spend more time woodworking which he took up more than three decades ago as a way to save money, produce beautiful hand-made creations and relieve stress, he said.

“Most things I deal with in my job take a long time to come to fruition, but progress on a chair or desk is easy to see hour by hour,” Meyer said. “It doesn’t matter if I’m building a plaque or cabinet; I relax when I create with wood. Watching a project materialize from wood is a magical process.”

After having worked in education nearly half a century, Meyer wants to explore other employment possibilities, he said. He is not above greeting customers at a department store, he said, nor is he opposed to getting his hands filthy. Meyer has considered opening his own woodworking business, he said, but believes building for profit would cheapen the pleasure he gets from creating for fun.

For now, Meyer wants to leave the doors of opportunity open, he said.

“I just have to wait and see what is out there,” Meyer said, smiling. “I never close doors, and I never say never.” 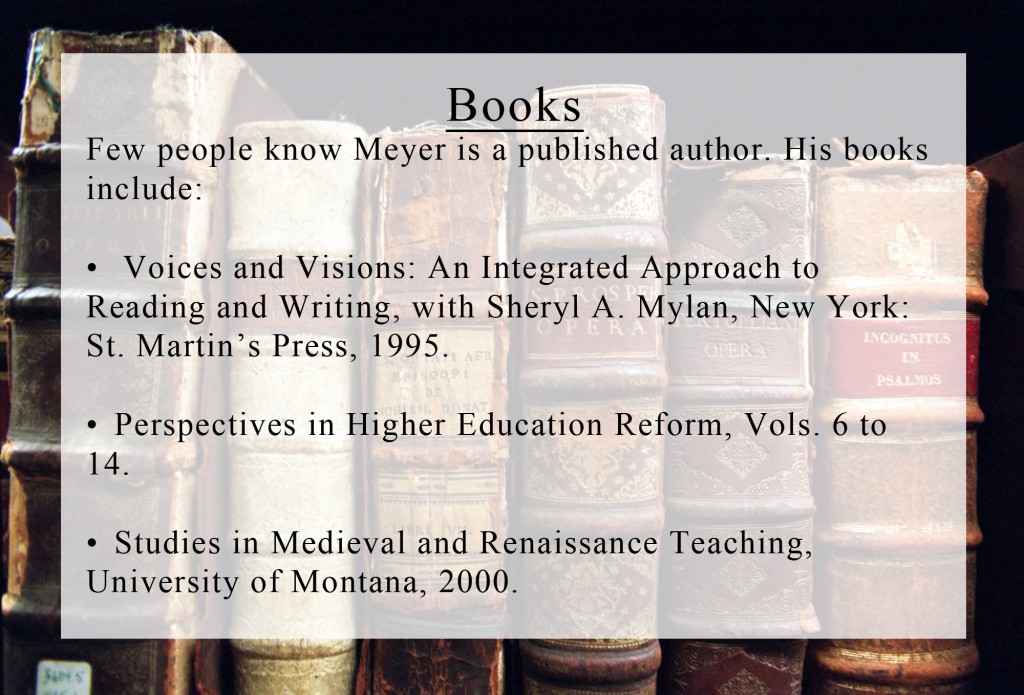