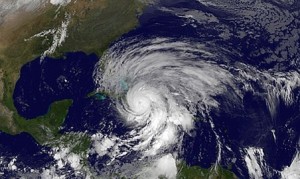 Reno and her family decided to do the training because they saw the need for it.

“Look at all the hurting people (on the East Coast) right now,” Reno said.

Hurricane Sandy made landfall two weeks ago but the damage is still noticeable.

Nearly 99 percent of residents have regained power according to the Energy Department. As many as 6,000 buildings have yet to regain electricity due to damage caused by the storm.

IHS Global Insight, a forecasting firm, is estimating that the storm will end up costing between $30 billion and $50 billion in property damage and in business lost. New York governor Andrew Cuomo plans to ask the federal government for $30 billion to aid recovery in his state.

According to the CRI website, the non-profit “trains and mobilizes volunteers, churches and other organizations to respond to disasters and other compassion initiatives in the United States and world-wide.”

Reno said her family chose CRI because it was a Christian based non-profit but added that there are several organizations that can prepare people for natural disasters.

“They teach you the basics on just about everything,” Reno said. “Basic medical training, such as how to splint broken or dislocated limbs, how to bandage and stop bleeding, those types of things.”

CRI wrote on their website that they, “not only focus on training and equipping volunteers for disaster situations, but also conduct on-going efforts to help lower-income communities around the world.”

Reno helped gather supplies for members of the CRI team that travelled to the east coast to help.

Besides collecting the normal canned food, blankets and basic necessities, Reno asked for people to donate rakes, shovels, work gloves, and batteries so that the volunteers had resources to help people clean up their properties.

“If you are donating towards a specific organization, they should have a list of things you can donate to give you a better idea of what they could need,” Reno said.

Reno describes the training as a constant natural disaster where the students must assess some type of disaster, send in triage team and then help victims as much as they can.

“They also taught us basic counseling, what to tell someone and what not to tell them,” Reno said.

CRI holds similar trainings throughout the year. On their website, CRI said that people are constantly referring to every natural disaster as the worst ever and plan to prepare people for that.

“The person who stands up in the midst of crisis with the answer is the leader,” CRI said on their website.

Reno said that the easiest way for people to prepare themselves for a natural disaster is to know how to purify water because it is the one resource humans need most to survive.

Medina funeral pays tribute to a prior CSU-Pueblo staff member