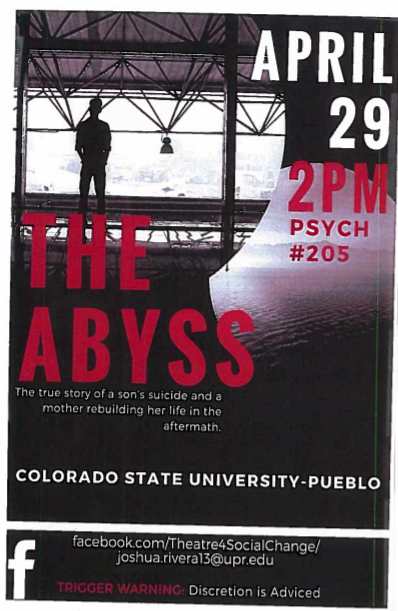 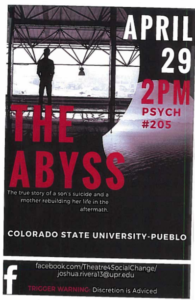 Sherri Mahoney, a junior at Colorado State University-Pueblo, was 42 when her son Tyler Mahoney committed suicide on Sep. 30, 2012.  After his death, Mahoney wrote a play about her son’s suicide and how she got through the tragedy that will be held  at CSU-Pueblo Saturday April 29 at 2 p.m.

“He was a curious, vibrant, full of energy and brought me so much happiness,” Mahoney said. “He was the only boy I’ve ever loved at first sight.”

Tyler like many high school students had dreams after for after graduation from Pueblo’s Central High School. “He wanted to go into the Marines,” his mother said. “In fact they called me in January (2013) to talk to him and I had to tell them he passed away.”

Sherri Mahoney took her experience and turned it into an informational play in hopes of changing the taboo on addressing suicide.

“I had been wanting to do something like this since my second year at PCC (Pueblo Community College),” Mahoney said.

Dr. Karen Yescavage, a professor at CSU-Pueblo, encourage Mahoney to write the play to help the community become aware of the rise in suicides. According to the Centers for Disease Control and Prevention, suicide is the 10th leading cause of death in the United States and has increased since 1999.

According to the Pueblo Chieftain 42 days into the year and Pueblo had 3 teen suicides. This is an increase for Pueblo which for the 2015 and 2016 only 34 were recorded.  A Healthy Kids Colorado Survey, conducted by the CDHE every two years, noted 21 percent of Pueblo County high school students considered attempting suicide while which is 3 percent higher that the national average. “As of January we had eight suicides here in Pueblo not counting the those who survived suicide,” Mahoney said.

The play written by Mahoney is meant to help change the way people talk about suicide and how to prevent more suicides in the community and across the U.S.

The play is also being directed by Joshua Custodio, a National Exchange Student from Puerto Rico. “Basically I am helping develop Sherri’s vision into a theatrical reality,” Custodio said.

Custodio and Mahoney are two psychology students taking part in the Positive Psych Courses, Theatre 4 Change. “We call it Theatre 4 Change, where we mentored and acted out situations facing the community with High School Students,” Custodio said. “My hope is The Abyss will open the discussion about suicide to the public.”

The play will take place in the Psychology Building, room 205, at 2 p.m. on Saturday. It is open to the public and is free to all who would like to attend.

First concert of the semester plans to be beneficial

Black History to be remembered in February and beyond