Summer time is known for many things in southern Colorado- unexpected rain storms, vast recreation areas which are frequented by residents and tourists alike and ‘100 days of Heat.’

The temperatures in Pueblo are already high, but the Pueblo County Sherriff’s Department, the Pueblo Police Department and the Colorado State Patrol have turned up the heat, as they work to keep unsafe drivers off the streets.

Throughout the summer months, law enforcement officials set up road-side check points in an effort to keep drunk drivers, and those driving under the influence of drugs, from getting behind the wheel.

Deputy Jonathan Post, of the Pueblo County Sheriff’s Office, said it’s important for people to understand any substance which taken into the human body that can impair the ability to operate a motor vehicle safely can result in a driving under the influence of drugs or a driving while impaired charge.

Any substance that you take causes some sort of physiological signs that can be detected, slow, slurred speech, slowed reaction time, or even a quick reaction time, Post said. Cocaine and methamphetamines can cause a quick response time, he said.

If someone is suspected of being under the influence of drugs, a drug recognition expert is called out, the suspect is taken into the command center where their blood pressure, pulse and temperature are taken and they will be asked to go through road side tests again. The data is then compiled to determine what drugs they may be dealing with, Post said.

Sleeping pills, he said, are a problem they have to deal with regularly. People take them, thinking they are safe to take, just because it’s a prescription, but it can be just as dangerous, he said.

Over Father’s Day weekend, a road-side check point was erected on Thatcher Avenue, just inside the Pueblo State Park, with the local and state law enforcement officials, as well as the Colorado Division of Wildlife, and Colorado Department of Parks and Recreation.

Danielle Hill, senior ranger at Lake Pueblo, with Colorado State Parks, said the joint effort was due, in part, to the waterfront activities.  She said it is important for those visiting the lakes with boats, or other water crafts, to be aware of the license requirements, and the dangers of boating.

“You need to be very careful when driving a boat. First of all, I’d like to say, they don’t have breaks and they don’t have driver’s license testing the way we do with vehicles, so they are a little more dangerous than a car, or they can be,” Hill said. “And also if you break down, you’re in the water and there presents a lot of danger there as well.”

She also said people who wish to boat will need to have current registration and they should be aware the laws have changed since last summer. Last year, the legal blood alcohol content limit was 1.0, but now it is 0.8; anyone over the legal limit will be handled as a “driving under the influence.”

“I just encourage people to be safe, and instead of drinking beer, they can drink water, and then maybe have a beer at the campground with their dinner,” Hill said. 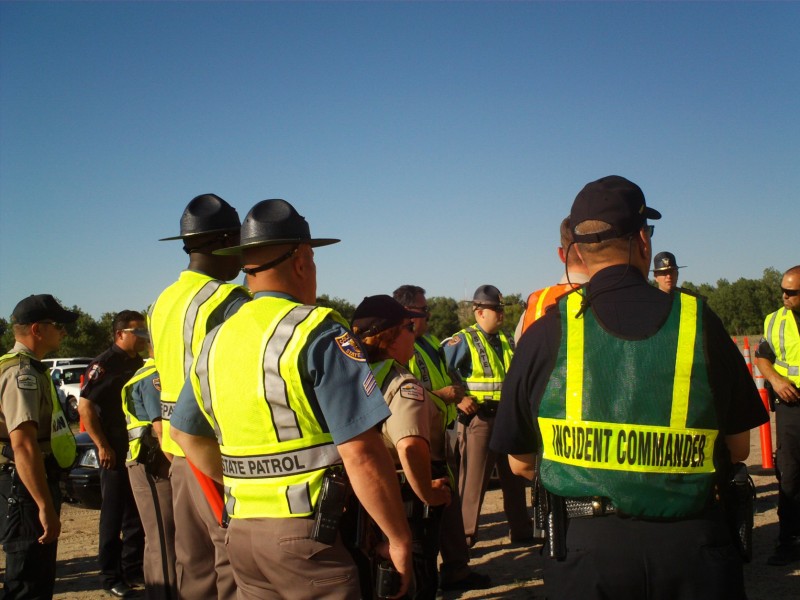 The check point is set up, the officers working at the check point are briefed, and the cars are directed off the road and into lanes. Drivers are told they are being detained at a sobriety check point and are asked to provide their driver’s license, registration and proof of insurance.

“If they appear sober, if they appear like they can operate a motor vehicle, we send them on their way. If they don’t we’ll run them through road side,” Deputy Post said. “If they pass the roadsides, they get sent on their way.”

If someone doesn’t pass the road side sobriety test, they will be asked for a breath or blood sample. Intoxicated drivers may make arrangements for their vehicles to be picked up from the check point, but the police department may choose to impound it, Post said.

Shaw Brown, deputy district attorney with the Pueblo District Attorney’s office, was at the check point as a volunteer with the Colorado Wing Civil Air Patrol the local Pueblo Eagle Squadron. He recalled a case from several years ago, when a woman in her 80s was stopped and arrested for having a glass of wine with dinner, because it put her over the legal limit.

“We don’t discriminate. We stop everyone. The officers check everybody,” Brown said. If that is the case, volunteers may be asked to pull the vehicle out of the lane, so others may go through, and a road-side sobriety test is administered.

While one may refuse to take the tests, Brown said if the officer believes a person to be under the influence that person will placed under arrest. Colorado state law requires a decision at that point- either elect to take a breath test, or an ambulance can be called to the check point to draw blood.

“Either way, we’re entitled to get a sample of what you’re blood alcohol content is,” Brown said.

Refusal to submit to a test results in loss of driver’s license for one year, and an automatic 30 day jail sentence if caught driving while license is suspended, he said.

Going to jail is always a potential end for anyone who gets behind the wheel while under the influence of any substance, but it is not guaranteed, Brown said.

“If this is your first offense, you may get by with no jail, but this is a very expensive charge,” he said.

At minimum, the potential cost are $600 in court costs, about $400 in probation fees, court costs on top of that as well as the cost for alcohol treatment, which at minimum is going to be 24 hours of education classes, for most people on a first offense, probably another 48 hours on alcohol treatment, Brown said. “It’s estimated that a first time DUI, if you hire a private attorney to represent you, it can cost as much as $10,000,” he said. “And that would pay for a lot of tuition.”

He also said a driving under the influence or driving while impaired conviction can affect future employment.

This holiday weekend the Pueblo County Sheriff’s Office will have“DUI saturation,” Deputy Laurie Kilpatrick, public information officer, said. There will be more officers than usual, and they will be focused on drug and alcohol enforcement, she said.

Spidey swings in to theaters