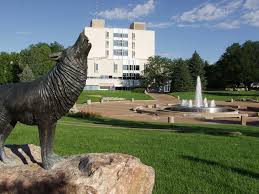 Water usage and management on campus has long been an issue. Poor pressure in the dorms and many of the multistory buildings have been the chief complaint. Wasteful practices such as watering during the day seem to show disregard for the environment. Water management is a complicated issue and the saga at Colorado State University-Pueblo is ongoing.

The water here at CSU-Pueblo comes from the Board of Waterworks. The pumps would supply all the water needed but sufficient infrastructure is not in place. Furthermore, the water tower, which is located on the opposite side of I-25, is not high enough in relation to the campus, so there is only so much pressure that can build up. The tower at its current height gives 50-55 psi per square inch compared to the average of 80-90. The towers on campus are augmentation towers for the Belmont neighborhood, which has a lower altitude than campus.

“Because of the great demand we have in the resident halls and the buildings, we have to stagger how much is taken from the piping system,” said John Barnosky, director of planning and construction.

The Department of Facilities is forced to stagger how much water is being turned on at any one time. The multistory buildings have booster pumps to try to achieve a reasonable level of water pressure but there are 24 zones that require watering, each with 40 sprinkler heads. There is no way they can all run at once, according to Rick Deherrera, assistant director of facilities.

“We just don’t have the infrastructure on the irrigation lines to be able to accommodate only watering in the evening hours,” he said.

Changes are in progress, albeit slowly. The initiative started in 2012. In a few areas, Blue grama grass has been installed. It uses 50 percent less water than the Kentucky blue grass that is seen throughout most of campus. It will soon be added to the median strips on Bartley Boulevard if funding is approved from the state. The disadvantage of blue grama is that it goes dormant in the fall. Using different native grasses could counteract that. Seasonal grasses should be installed throughout campus, according to Barnosky.

“Everybody wants to minimize water usage but they call the facilities department if there is a little dry patch,” he said.

He also mentioned xeriscaping as another option they were pursuing. Drought resistant plants are grouped together according to their water consumption. It reduces water usage by up to 39 percent, according to a 2005 study conducted on Las Vegas homes. Its biggest downside is that it requires maintenance and it is more time consuming than cutting a swath of grass.

Women’s basketball squeaks by with win against Adams State