“You Don’t Mess With The Zohan,” nor should you tamper with the sound quality. Adam Sandler’s new film drove me nuts. Oh, not because of awkward special effects or sometimes wooden acting, but because of the audio issues in the theatre that kept yo-yoing up and down.Now I’m not one to name names, so if hypothetically I worked at say . . . Skinamark, I might’ve warned people that the audio in one particular theater was acting a bit screwy. I might’ve also told the customers to come back at a different time so the problem could be fixed. But hey, that’s just me. Audio issues aside, let’s get down to business.

It’s been a while since audiences have seen a Sandler flick like the early days of his career. “Zohan” is classic vintage Sandler chock-full of sexual innuendos, bathroom humor, impossible situations and yes, a role is given to his best friend, Rob Schneider.

In “Zohan,” a gifted over the top Israeli counter-terrorist agent named Zohan (Sandler) who is, “like Rembrandt with grenades” wants to get out of the spy business. He now wants to live out his dream – to cut and style people’s hair.

By faking his death, Zohan moves to New York where he finds a seemingly “normal” family who give him a roof to live under. Zohan soon scours the city to find his dream job and ends up working for business owner, Dalia (Emmanuelle Chriqui) a Palestinian hair stylist.

While in New York City, Zohan becomes an ultra popular stylist, which helps to save Dalia’s business. Zohan’s actions make him a handful of outrageous friends and enemies.

In the real world, the Palestinians and Israelis are bitter adversaries, yet in “Zohan,” the common belief American dream means a fresh start for everyone.

Because of the American dream, in the land of humor, the theme is people can live side by side since everyone just wants to make a decent living. Havok in the world is only caused by those who are greedy. In the case of “Zohan,” businessmen plan to destroy Zohan’s community which naturally stirs up trouble.

Lame as the plot sounds, believe it or not, this movie has quite a few laughs. Think “Billy Madison” or Big Daddy.” One can tell that Sandler, who co-wrote the screenplay, was influenced by the success of “Borat.” Like “Borat,” there’s plenty of physical slapstick comedy. Sandler holds nothing back in this all out comedy.

There are, however, some minor problems with “Zohan.” the movie does drag here and there. Also, the special effects seemed forced at times. The chemistry between Sandler and Chriqui wasn’t really there so when the audience finds out that one has feelings for the other, it didn’t quite fit in with the entirety of the film.

All in all, “Zohan” will make its target market laugh and may be a pleasant surprise to those who don’t care for most Sandler flicks. “Zohan” proves Sandler still has the magic touch when it comes to comedies. This latest film is his strongest comedic performance since “Big Daddy.” It’s no “Happy Gilmore,” but by far one of Sandler’s best comedies in a long time earning him a B- Could’ve been higher if the audio wasn’t messed up. 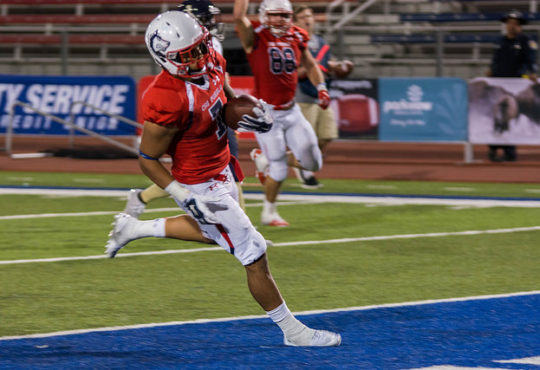