Students lined up to try Bananas Foster in the cafeteria on Feb. 25. While standing in line, students could feel the heat of the flame from the foster creation.

Giving the cooking demonstration to the students was Chartwell’s catering chef, Edward Tracey. Tracey has been working on the Colorado State University-Pueblo campus since November.

“I like my job because all I do is cook. I don’t have to do inventory or anything like that. It’s a really good job with good benefits,” Tracey said.

After attending Ft. Lewis College in Durango for four years, Tracey attended the Culinary Institute of America in New York where he received his Associate’s Degree. He said this is where he learned to make Bananas Foster. 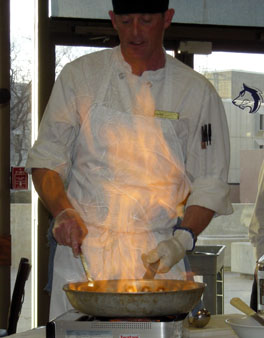 Tracey said he decided to come back to Pueblo after culinary school because his parents were still here and the cost of living was cheaper.

Bananas Foster originated from New Orleans, LA in 1952 in a small restaurant called Bananas, which is still open today. Bananas Foster can be found at most fancy restaurants as a table side attraction. Bananas Foster is made from brown sugar, butter, bananas, cream and rum.

First the brown sugar and butter are melted together to make caramel. Then bananas are added to the mixture. Rum is then carefully added to create a flame in the pan and to give the foster more flavor. Heavy whipping cream can then be added to act as a stabilizer. The foster is then poured on a scoop of ice cream and is ready to be served.

One act plays showcase the many talents of CSU-Pueblo students