As Black History Month draws to a close, Colorado State University- Pueblo hosted a night of comedy for an audience with different backgrounds.

The comedy production “Sell Out” performed Wednesday night in Hoag Hall. The group, whose performance was funny from the start, stresses individualism and lives by their motto, “be yourself, because everyone else is already taken.”

The comedy group of four men joked about experiences being black in today’s society. The humor lasted the entire performance and the group even cracked jokes with audience members.

The comedians also had audience members write down questions before the show and each comedian answered the questions during the second half of the show. 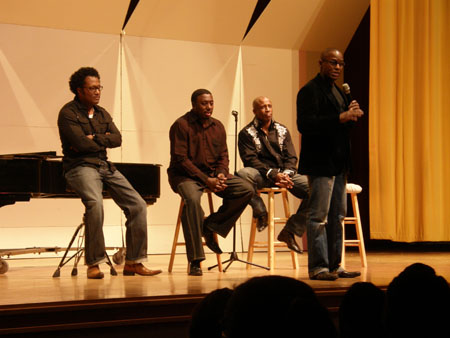 “Sell Out” was founded by BT , which stands for “Black and Tempting” and Billy Washington.

“I was in a hotel room and thought about doing a one man show called ‘Sell Out’,” BT said. “I told Billy about the idea, and he called up the other two guys. He’s the architect of what the production is now.”

Since then, BT and Washington have been touring the country with Louis Johnson and Vince Morris performing the show.

BT always knew he wanted to be a comedian.

“I think my talent is a God-given talent,” he said.

A native of Oklahoma and a graduate of The University of Oklahoma, he said he always loved to make people laugh. Armed with the influences of Richard Pryor and Eddie Murphy, BT started to put his talents to good use in college.

BT said he wants audiences to see there are different kinds of people.

“I want people to get that there are different shades of black,” he said. “I want the audience to get our message – that just because people like different things doesn’t mean that they are a sell out.”

Billy Washington, the group’s co-founder, was a police officer in Houston for five years before doing comedy professionally. Along with comedy, Washington is a musician who often incorporates piano playing into his acts.

Washington had the opportunity to open for Aretha Franklin in 2003. Franklin was so blown away she hired him on the spot to open for her nationwide tour for the next three years.

He has recently completed writing and producing a film, “Bob – The Urban Legend of Comedy,” and landed his first international deal with BCD Distribution.

Louis Johnson was great at the show. Johnson is a regular on the U.S.O. World Comedy Break Tour.  Since 1995, he has traveled all over Asia, Europe and the Middle East performing for troops. He also won Showtime Network’s Funniest Person in America Contest and is a regular headliner for cruise ships.

The production, “Sell Out,” was a perfect ending to Black History Month.

Students showcase their talents in competition