Many CSU-Pueblo students can now say they have lived in boxes; even if it was just for a night as the President’s Leadership Program’s junior class hosted their first Box City event Nov. 13.

More than 50 students attended the event to raise awareness of the homeless youth living in Pueblo County.

Vicky Bonetto, 20, a biology and chemistry major, is a member of PLP in charge of Box City. Bonetto said the intention of Box City is to not only raise awareness of this issue, but to also get other organizations to recognize homelessness as an important issue.

Box City began at 6 p.m. and students endured November’s cold weather all night until the event ended at 6 a.m. the next day.

During the event, students made houses out of duct tape and cardboard.  Some students got creative and built mansions.  Another activity for students was a dumpster dive, where students had to dig through fake trash and find canned food products.

They had to open it without the use of a can opener, something that is a fact of life for homeless people. Most students used street signs to get their cans open. Other students used pocket knives or brute force.

“That’s the biggest type of awareness that we are trying to raise here, is that there are kids who are doing this every day,” said Nichole Beaudin, 20, a Spanish and psychology major, and a PLP member.

Box City is the PLP’s junior class project for this semester, but it’s not finished yet.  The project was divided into three parts: research, awareness, and outreach.  Box City is only the awareness part of the project.

That night, students had the chance to also make bracelets and holiday cards to send out to the families with Posada , a nonprofit organization in Pueblo that provides shelter and other services to homeless families and individuals, according to the website. The PLP worked closely with Posada throughout the semester to plan this event.

Anne Stattelman, director of Posada, and Sister Nancy, a member of Catholic Charities, both made appearances at the event and spoke to the students as future leaders of this country, and stressed the importance of raising awareness on this issue.

Sixty nine percent of Pueblo’s homeless population is families with children who still rely on their parents for basic needs, such as food and shelter, according to the Posada website.

Lindsay Reeves, 21, a mass communications major and a junior in the PLP, is one person who was in charge of the event.

“We encouraged everyone to bring donations to the event tonight and really try to experience what living outside for a night feels like,” Reeves said.  “I don’t think any of us truly understand the meaning of it.”

Gustavo Endara, 20, a Spanish and political science major, was one of the students who attended the event, despite the cold weather, and stayed the entire night.

“We are here for the long haul. We are going to sneeze our way to victory,” Endara said.

Reeves said they decided to tackle the issue of homeless youth because it is not as well known in the community.

“It’s kind of an invisible problem because nobody really sees it, but it is still a big deal and it’s still something that is very, very important for the community to realize that it is going on,” Reeves said.

“It’s a big issue and it’s getting bigger,” said Beaudin, PLP member. “People aren’t aware that the children are the ones who are the untold stories. They are the ones with voices that can’t be heard.”

Bonetto said they chose homeless youth for their project because college students are still considered youth and the issue was relatable to almost everyone on campus.

“Since we are all considered youth, we thought that if we picked some sort of issue in Pueblo County that we could maybe feel like them because we are the same age,” Bonetto said. “Maybe it’s easier for us (students) to help them.”

“People need to realize that the littlest things help. You don’t need to donate $20,000 to make a difference,” Beaudin said. “This little teddy bear puts a smile on a little kids face more than anything.”

The event did not cost the PLP any money. All the cardboard was donated by Ross, the clothing store, and all the other supplies were donated by students and the Office of Student Activities. 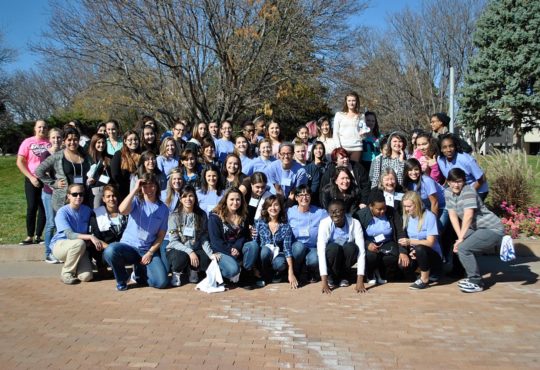 Students gather to learn about their differences