The list for the new dean of the College of Science and Mathematics at Colorado State University-Pueblo has been whittled down to two men.

Both have a public interview before the selection process is complete.

The dean will be responsible for overseeing the work of the college, including budgeting, hiring, curriculum, development of scholarly activity and problem resolution, department of chemistry Chair, David Lehmpuhl said.

One of the candidates is Dr. Ron Williams, dean of the College of Science, Engineering and Technology at Saginaw Valley State University in Michigan.

Williams, 54, said global competition is the struggle for jobs throughout the world. While the population is 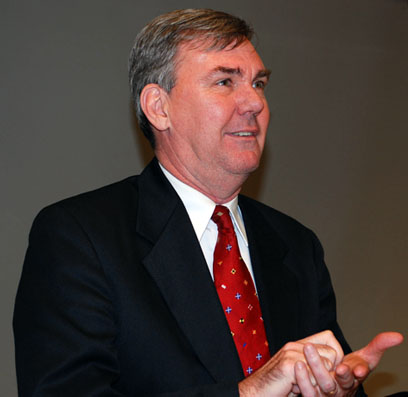 “How do you educate people to function in this new kind of approach?” Williams said he often asks himself. “Living in Michigan I have had an opportunity to have front row seats to this kind of process.”

The keys, he explained, are project-based instruction, locally focused, global awareness and community involvement through outreach programs and projects.

He also said students have an opportunity to learn how the system works when different departments interact while working on the same project.

He gave a few examples of projects he oversaw as dean at Saginaw in which the chemistry department worked on the development of the product, but they were then interacting with business and marketing students, who all learned from each other.

“As a comprehensive university, I feel you have an obligation to pay close attention to the region that you’re in,” Williams said. “That’s an advantage because it connects you to potential projects that your students can work on.”

Being globally aware, he explained, is as simple as having “green projects” on campus. One project that has been successful at his current university is the worm farm, Williams said.

It became a competition in which different departments competed to see whose batch of worms could eat the most garbage in a month.

The garbage was refuse from the campus dining facility, which also saves the school some money in garbage disposal. It was a school-wide competition with a big response, Williams said. He said he would support similar green ideas offered by the faculty at CSU-Pueblo, though they would have to take ownership and run with it.

Williams said a student community outreach program started with one class of ninth graders at a local high school, but has grown over the last four years to include two more schools and now covers grades nine through 12.

Williams and others from his department tried to come up with a solution for the lack of math and science skills of minorities in their community. They decided to offer tutoring at the local high schools.

“Mathematics is important simply for the opportunities it provides you,” Williams said. The tutors become role models for the high schools students, and the valedictorian at the original school for the last year was tutored by the college students, and attending Saginaw now, he said.

“If your interests were finding a dean who was going to add graduate programs and that was the focus, I wouldn’t be interested,” Williams replied when asked his opinion about undergraduate schools adding graduate programs.

The best things about being a dean are the moments when students understand, when faculty come up with projects and solutions and when it makes a difference, he said.

Williams said he is applying for the position at CSU-Pueblo because he would like to work at a university where the dean’s position isn’t regulated by a union in such a way as to make the dean’s job little more than that of a faculty babysitter.

At SVSU, these regulations keep him from being able to be as effective as he would like to be.

Williams also said CSU-Pueblo has a lot to offer. The facilities are in good shape, with a wide variety of equipment in the chemistry department, he said. He also said he noticed the people at CSU-Pueblo seem relaxed and friendly, with good comradery amongst the faculty.

While he admits his experience with the Hispanic community has been little, he said he is prepared to learn all he can mentioning the tutoring program was for minorities.

Williams described his job as dean as being an advocate for the faculty while being responsible to his superiors. The faculty comes to him and work together to come up with a solution to a problem and he takes it to the college and works with them until everyone is satisfied.

Williams has authored one publication, “Fundamental Limitations on the Use and Comparison of Signal-to-Noise Ratio” as well as co-authoring three others: “Colorimetric Analysis Using a Neural Network Based Light Sensing Array,” “Muti-Instrument Calibrations with Genetic Regression in UV-Visible Spectroscopy” and “Luminescent Properties of Doped Nanoparticles. Preparations of ZnS with Manganese, Copper, and Silver Dopants.”

The next interview for this position will be held March 19 in the Chemistry building, room 104 from 2 to 4 p.m.

Dr. Lehmpuhl said the final decision will be made after the second interview by the Provost with input from the search committee, deans and directors, the president and others who provide feedback.