Invisible Children, a charity that has been made popular thanks to Fall Out Boy bassist Pete Wentz, is showing a documentary about the struggles in Uganda, Africa on Wednesday, March 11 at 12:30 p.m.

Though the organization is heavily supported by Wentz, it was not created by him. Invisible Children was created by three young American film makers who traveled to Uganda in 2003 in search of a story.

What started as a filmmaking adventure turned out to be much more when they found a tragedy that disgusted yet inspired them.

A tragedy where children are both the weapons and the victims.

After returning to the states, they created the documentary, “Invisible Children; Rough Cut.” The film exposed the horrible realities 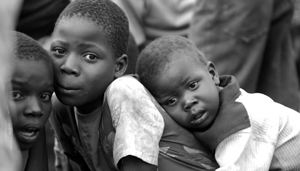 The three originally showed the film to friends and family, but now it has been seen by millions of people. Because of the overwhelming want to help, Invisible Children was created to give those that want to help a way to respond to the situation.

Cole Carper, an intern with the non-profit organization, said he was attracted to the organization when he saw the documentary two years ago.

“I was surprised about how bad the situation was over there and was really moved by the interviews, especially with the young soldiers,” Carper said. “I liked that this movement was started by young people, the youngest only nineteen.”

The organization has had other events in the past. In 2006, Invisible Children had the “Global Night Commute,” worldwide event which took place April 29.

Young people from around the world walked to city centers in their towns and spent the night in parks showing support for Ugandan children who walk every night into city centers to avoid capture by the Lord’s Resistance Army.

The organization also held “Displace Me” in 2007, a nationwide event on April 28 in fifteen cities across the United States. Almost 70,000 people came together to raise awareness about displacement camps in northern Uganda.

This film tour is the sixth tour in three years. This tour is the first time the organization is traveling to other countries around the world.

“This year we’re taking this documentary tour to Mexico, Canada, all over the United Kingdom including Scotland and Ireland, and to New Zealand and Australia,” Carper said.

Invisible Children also has the Schools for Schools program. Carper said that the program empowers Ugandan people to get the school system on its feet.

“We also have high school and college support in the effort to help schools.” He said.

Carper said he likes the fact that so many young people want to help.

“It’s the best part. It’s amazing that people from different backgrounds can come together to help people that they don’t even know. I like that young people are coming together for a cause: to help young people,” Carper said.

Girl in a Bookstore: What do you think of parking pass prices?