Jennifer dared me to do it. I hate needles. The idea of voluntarily having a needle sick me in the finger until I bleed is not a good time in my book. Still, I did it.

Stephanie Sanchez, 22 years old, sits at the Occhiato University Center lobby at Colorado State University-Pueblo waiting for anyone who would like to have their cholesterol checked for free. She said she works for the Pueblo County Health Department, visiting different locations throughout the city to offer this service to those who might not get it checked otherwise.

Don’t let external appearances fool you, she warns. Stephanie said she was shocked the first time she had her cholesterol checked expecting it to be bad numbers since she is overweight. Instead she found out she was well within healthy ranges, she said. 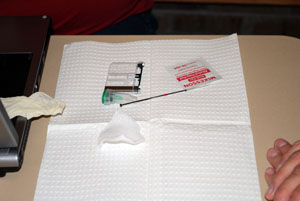 On average five out of 10 overweight people she has checked are like her: expecting poor results, and receiving good numbers, Stephanie said. In contrast, four out of 10 people who appear healthy are shocked to find out their numbers are not as good as they had assumed.

So Jennifer dared me to do it and I was curious. I’m petite and not overweight, but by no means am I super healthy. If people who are more “fit” than I am have bad numbers I could be anywhere.

I gave my name and birth date, which were entered into the computer. In a matter of moments it was time.

One, two, three, deep breathe. And it was done. I barely even felt it.

More questions followed in the ten minutes it took the machine to work: family medical history, diet and exercise habits and of course my height and weight.

The machine spit out seven numbers and Stephanie explained them to me. Even though I’m well within healthy ranges, I should still try to give up at least one bad habit.

High Density Lipids (HDL) are what is commonly referred to as “the good cholesterol” and is a number that should be more than 40. For those who want to be in optimal health, target numbers are higher than 60.

Low Density Lipids (LDL) are referred to by many as “the bad cholesterol” and the number should be below 129. Optimal health target number is below 100.

Total Blood Cholesterol Level should be below 200, according to the American Heart Association. This number is most important when compared with HDL and LDL. If all of those numbers land within the desirable range, then the risk of coronary heart disease is lower.

Triglycerides (TG) are a form of fat the body produces. High triglycerides are from most bad habits such as sedentary life, smoking, excessive alcohol consumption and eating too many carbohydrates. The target number for triglycerides is below 150, according to the American Heart Association.

Blood Glucose Level is a measurement of how well the body is processing out the sugars that are eaten.  Recently the American Heart Association changed the range of target numbers. It used to be any number between 80 and 120 was considered safe, but now they have lowered the high number to 100, to help combat the increase of Type 2 Diabetes patients.

Body Mass Index (BMI) is a measurement of the total percentage of body fat to all other body compositions. Anything between 18.5 percent and 24.9 percent is healthy, according to the American Heart Association.

Framingham Risk Score is based on risk factors and cholesterol levels. Stephanie explains it as the likelihood of developing coronary heart disease: the lower the number, the lower the chances.

Jennifer Day, a 25-year-old student majoring in exercise science and health promotion at CSU-Pueblo, had a slightly different reason for having her cholesterol checked. Her husband is starting an exercise program, she has a little one at home and most importantly it’s free, she said.

Day said she was little surprised with her results since they were higher than the last time she had been tested. Her answer to that is to jump into training with her husband.

Older students at CSU-Pueblo are taking advantage of the free service, too. Tanamarie Rivers, 50, is a non-traditional student who realizes the importance of monitoring cholesterol regularly.

“Anytime they offer it free, I check it,” Rivers said. “I have very good cholesterol, and I want to make sure it stays that way.”

It is important to take advantage of this opportunity to get a free test, Stephanie said. She also emphasized the importance of maintaining a healthy life style: exercising, eating plenty of fruits and vegetables and reducing alcohol and tobacco use.

You can get your cholesterol tested for free Jan. 30 in the OUC lobby from 9 a.m. to 3:15 p.m.. Don’t eat or drink at least two hours prior to the screening.

Girl in the Bookstore: Should CSU-Pueblo’s Underground lounge be restored?

Rugby on the rise at CSU-Pueblo