When given time off of school, partying and drinking are the only things on 21-year-old minds, but many students fail to realize the actual dangers of going to “foreign” places they have never been for Spring Break.  Most think to themselves “nothing bad will ever happen to me,” or “I’m not that stupid,” but Gilbert Garcia can beg to differ.

Gilbert Garcia, 22, and his friends describe themselves as being like any other average college students that like to take vacations and have a good time.

“Everyone has heard about the crazy jail stories from Mexico, but I never thought I’d be in that same boat,” Garcia said.

It was their last night in Mexico. The 2006 Spring Break was coming to an end, so the guys wanted to make it good night, before returning to the states the next afternoon.

After a long night of clubbing and drinking, Garcia said he and his friends decided they didn’t want to take a cab ride back to the hotel, because of the cost. Money was tight on their last night of vacation, and they all agreed that it was a short enough distance to walk back to the hotel.

As many know from personal experience, a lot of drinking comes with a lot of urinating.

About midway through the walk a friend of Garcia’s, Taylor Vaughn, decided to duck out into an alley for a quick pee break.

“I really had to go, I couldn’t hold it anymore,” Vaughn said.

Vaughn made sure no cars were coming when he went, but Garcia didn’t have the same luck.

Garcia noticed Vaughn finishing up, so he decided to follow.

Everyone started walking back, not knowing Garcia was still urinating in the small alley, when a “federale” car rolled upon the walking group.

The Mexican police just happened to pull in a parking spot right next to the alley where Garcia was doing his business. Garcia said he had no clue that they were directly behind him.

The police got out of their car and headed for the urinating Garcia. They grabbed him just has he was finishing up, put hand cuffs on him and then threw him in the back of the car.

“I have to admit I kind of laughed when they arrested him, because he didn’t even have time to buckle his belt so his pants fell down to his ankles while they were putting him in the car,” Archuleta said.

Everyone gathered around the cops to ask why Garcia was getting arrested. The communication between the American college students and Mexican police was getting nowhere.

Vaughn pulled out his wallet and offered the two officers $100. The police shook him off with the little communication they had between them, he said.

The two officers got back in their car and rode off with Garcia.

“We couldn’t just leave him hanging, so we all ran after the car to see where they were going,” Vaughn said.

The group of friends finally caught up to the car after running a couple of blocks up the street at a stop light. Archuleta was the first one to the car, he tapped on the window.

“I held my hands together like I was praying to get them to let Gilbert go,” Archuleta said.

The second round of begging didn’t work as planned for the group, but Vaughn had another scheme. “I asked everyone to pitch whatever money they had on them. I rounded up a little over $500,” he said.

Vaughn flashed the money at them, and held up all of his five fingers to communicate the $500 he rounded up. The officers looked at each other, un-cuffed Garcia, let him out, took the money and bolted.

“I couldn’t believe what just happened,” Garcia said. “You only hear of this stuff in the movies.”

The friends caught a cab ride back to the hotel to end the crazy night.

“Will you ever pee in public again?” Vaughn asked Garcia.

“Of course! Especially when I have some great friends to bail me out,” Garcia said. 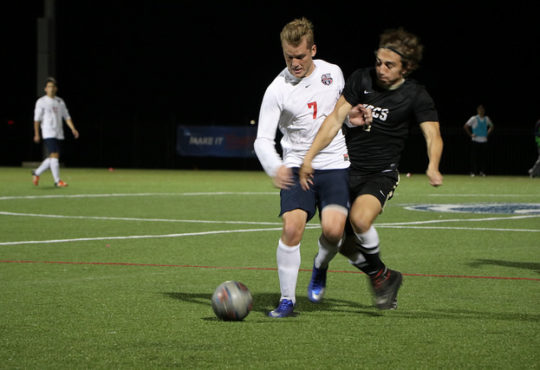 They can’t all be ‘Deep Throat’

Temple Grandin will be the Distinguished Speaker for March 13