Here in Colorado, ski and snowboard season is one of the most exciting times of the year. As soon as the news spreads of the first resort’s opening day, the excitement is almost palpable throughout the state. Here in Pueblo, students at CSU-Pueblo are no exception. They are among the many anxious skiers waiting to hit the slopes.

Because opening day at the resorts in Colorado is such a big deal, some resorts make opening an all-out festival.

Keystone Resort announced recently that its opening day is set for Friday, Nov. 7. The first chair will take skiers to the top of the mountain starting at 9 a.m., officially kicking off the resort’s 44th winter season.

While the cold weather athletes anxiously wait for 9 a.m. to roll around, there will be festivities and food to occupy them. According to Keystone’s website, skiers and riders will enjoy warm doughnut holes from Keystone’s renowned pastry chef Ned Archibald, as well as hot chocolate and coffee at the base of the River Run Gondola. There will also be a disc jockey, and prizes awarded to guests.

Like Keystone, Breckenridge Ski Resort will open Nov. 7. Breck ended their 51st year last spring with an extended season and huge powder days. The start of this season will kick off as Peak 8 opens with what locals call their “favorite day of the year.”

Since Pueblo is not necessarily known as a “ski town,” skiers and riders around the area must make the long trek to their favorite mountains for opening days. Waking up at the crack of dawn and driving a minimum of two hours is nothing unusual for the Pueblo skier or rider.

However, any skier or rider will tell you it is well worth it. CSU-Pueblo student and avid snowboarder Kenny Porter explained his thoughts on being a snowboarder, living in Pueblo and still getting the most out of the season.

“Living in Pueblo does make it kind of difficult to go snowboarding a lot because it is a long way away from any resorts. The closest one is Monarch, which is two hours away at least. Plus, going to school here makes it hard because I don’t have much time between that and my job,” Porter said.

Regardless of the challenges living in Pueblo may present, the excitement of the ride is always worth it for ski and ride enthusiasts. Porter explained that a large part of the thrill of snowboarding is the fact that it’s not easy and requires skill.

“The immense challenge of the sport makes it fun, and it’s even better when you have the possibility of hurting yourself when you mess up,” Porter said. “It’s something you can always get better at. And of course I like it because I’m good at it.”

This year’s ski and snowboard season is looking like it will be one of the best yet. With so many resorts already open and many more opening in the next few weeks, you will not want to miss the chance to hit the slopes in the snowy Colorado mountains. 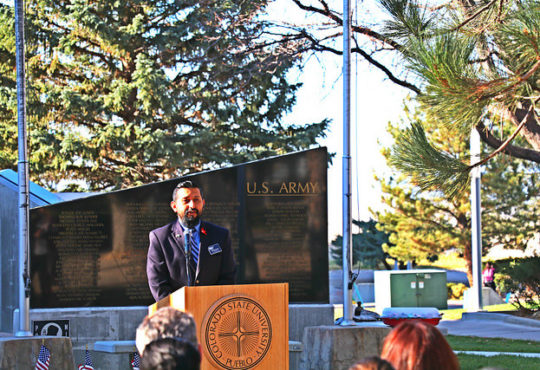