Humor has graced Colorado State University Pueblo with her presence.Salina Jalees took the crowd by storm on Jan. 28 in the Occhiato University Center with her comedy act. In her routine, she joked about her observations in relationships, racism and arranged marriages, along with other topics. 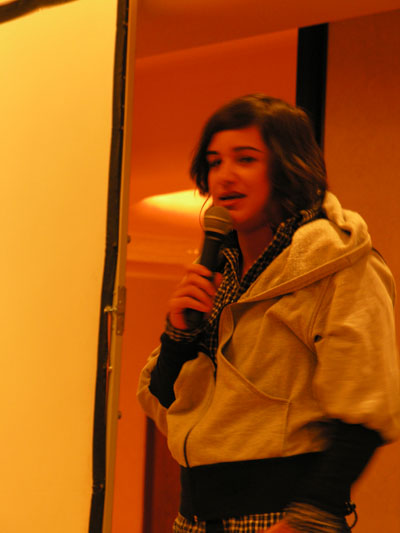 A native of Canada, Jalees has been performing comedy acts for six years. She performed on stage at the age of 16, and had the honor of being the youngest stand-up comic added to Yuk Yuk’s professional roster. She then was hired by Second City and broke Mike Myer’s record for being the youngest comic hired to the company.

She has performed at the Just for Laughs Festival, as well as recorded a Comedy NOW special for Canadian Television Network and toured across North America. Jalees has also had leading roles in CBC’s “Smart Ask” and Toronto One’s “The Toronto Show.” Now that both shows are no longer on the air, she is proud to be studying radio and television at Ryerson University.

Jalees said that her content comes from everyday life. She said she used to be shy about where she came from, but doing comedy gave her a way to laugh about it. She carries her content ideas in a notebook that she takes everywhere and writes funny observations around the world around her.

Her goals also go beyond making it big in Canada.

“I really want to do radio and television in the United States,” she said.

Jalees wants people to laugh as much as they can during her show. “I grew up shy and embarrassed about where I came from,” said the comedienne, who is of Middle-Eastern and Swiss decent. “I want people to be proud about where they come from.”

Brienne Moore brings her own eclectic blend of acoustic soul, folk and R&B to CSU-Pueblo at 8 p.m. on Feb. 4 in the OUC Ballroom.

Video Game Releases: Week of May 24

Every girl wishes she was in Twilight

Students prepare to check out of dorms as semester winds down