Colorado State University-Pueblo is featuring Augustine Romero’s artwork in the Fine Art Gallery located in Hoag Hall in the Capps Capozzolo Academic Center for the Arts.

Augustine Romero graduated from CSU-Pueblo in 1985. He has earned an M.A. in sculpture from New York University since then.

Romero’s pieces have been shown in numerous places including the Socrates Sculpture Park, Francis McCray Gallery, 516 Arts, as well as many other locations.

“It is valuable to see someone from the same school that has done a lot with his artwork,” said Caroline Peters, Assistant Professor of the Arts, on why he was chosen for the exhibit. 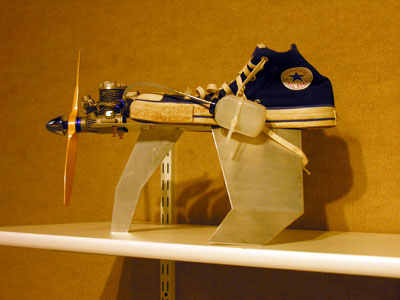 “I also think he is a local artist even though he lived in New York and now resides in Albuquerque, NM and he is an artist working in a different mode, regionally,” said Peters.

Romero’s artwork incorporates the use of non-traditional art materials to construct his art pieces. His installations and sculptures deconstruct traditional boundaries of art. A prime example of this is how Romero includes Heineken bottles and car air filters in his pieces.

“The Remains of the Mexican Gray Wolf” piece was inspired by a USA Today article.

“I was reading and saw that a family of Mexican Grey Wolves were killed on the highway. This made me think of debris on the side of the highway, and how you never really know what it is until you pass it. Then all that is left is the memory of what it once was,” said Romero.

“The Lou Dobbs Border Security Drones” piece is rather controversial and entertaining at the same time. “I liked this piece because of the humor and strange irrationality that makes you think even though political issues are apparent,” Peters said.

“I was intrigued by news programs on television and Lou Dobbs’ comments about illegal aliens and border security,” Romero said. There is an air release lever that reads ‘Air release for the ignorant. They are waiting for you on the corner. They want your dish washing job, bed making job and the nanny will teach Spanish to your kid.’ “I was kind of poking fun about peoples comments on these issues,” Romero said.

The center of the exhibition is the “Cuauhte’moc”, meaning falling eagle, wall installation. There are fifty spray painted wooden panels that are all brought together to make one massive piece. 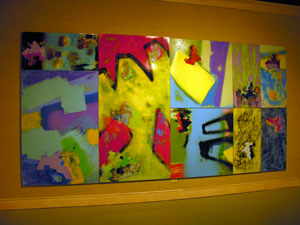 “I did each piece individually and it is kind of a mural wall piece. I figured if a person bought one it would be like a piece of the bigger puzzle,” Romero said.

The “Winter Solstice” piece climaxes on Dec. 21 when the sun is at 32 degrees, its lowest point in the horizon. The sculpture is a ghost rider memorial of the famed Mexican Revolutionary Emiliano.

“It took me three months to make and I did it on site at the Socrates Sculpture Park in New York. The sculptures are changed every six months to a year,” said Romero.

These and many other pieces of artwork from Augustine Romero can be found in the gallery which is open to the public through Feb. 21.

IJM chapter a possibility for CSU-Pueblo