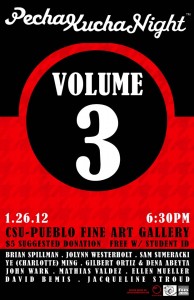 The event will feature 10 presenters, including CSU-Pueblo students, faculty and community members, who will share ideas on a variety of topics such as design, photography and chemistry.

The presentations will stick to a 20 by 20 format, which means each presenter has 20 slides and 20 seconds per slide to share their knowledge and showcase their talents, for a total of six minutes and 40 seconds.

The name “PechaKucha” was drawn from the Japanese word “chit chat.” In 2003, Astrid Klein and Mark Dytham, both architects, held the first PechaKucha Night in Tokyo. Their initial goal was to give young designers a way to meet and share ideas in a snappy way, according to information on PechaKucha’s Web site.

After the event was successfully hosted several times in Japan, it has gone global to hundreds of cities worldwide with the number growing everyday.

Pueblo was 417th city to join the phenomenon because of the event’s organizer Emily King, a private scholarship administrator for CSU-Pueblo Foundation.

King first attended a PechaKucha Night in Denver, where she fell in love with it, she said.

She looked out for the opportunity for Pueblo to become a host city and she applied. Then her application to PechaKucha Foundation in Tokyo was accepted.

Pueblo’s previous two PechaKucha Nights were hosted at the Sangre de Cristo Art Center in June 2011 and October 2011. The events successfully drew a crowd of locals and spread the word for itself among Pueblo enthusiasts.

The third event’s suggested donation is $5, but it is complimentary for CSU-Pueblo students. For more information, contact King at pechakuchapueblo@gmail.com