Parade watchers spread out blankets and chairs to watch the floats and the cheerleaders’’ performance. The Office of Student Activities and Lambda Chi Alpha were some of the groups that participated along with Community Bank.

Those with the Office of Student Activates, dressed in brightly colored shirts, were all prepared for the parade this year.  Kelli Close, student activities coordinator, did not know what the turnout was going to be this year, but was optimistic.

“Everyone is excited to be here for the parade this year,” Close said. “Its going to be small but it is a great tradition that can be carried out for a long time.”

Behind The Office of Student Activities the men of Lambda Chi Alpha, one of the fraternities at CSU-Pueblo, displayed their house letters. The members of Lambda Chi Alpha are the flag runners for the football games, running flags with the university’s letters up and down the field when they score.

Justin Menu, president of Lambda Chi Alpha, said the parade has potential to get bigger each year and gives students a chance to build together.

The sound of drums rang in the air as the CSU-Pueblo’s marching band fell into rank with the cheerleading squad lining up right behind them..

The parade route started by the Occhiato University Center, went past the student recreation center and ended at the Neta and Eddie Derose ThunderBowl Stadium. Parade spectators were showered with candy and popcorn balls, something to take home for coming out and watching.

Dressed head to toe in CSU-Pueblo apparel, Gailynn Romero, who is a junior who is studying social work at the university, watched a cheered as the each performer and float went by.

“I think the parade shows camaraderie for the university,” Romero said. “It brings a lot of different department who are usually just by themselves together in one event.” 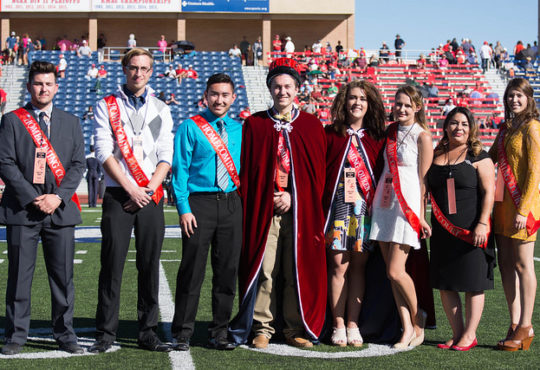