“How often have you said you don’t have the time to do something?” said Rhodes during the commencement ceremony held Saturday, May 1 at the Colorado State Fair Events Center. “You put energy into earning your degree, right?  So, isn’t energy the real reason why you are sitting here today?”

More than 600 students attended the event to receive master and bachelor’s degrees, and to thank professors and staff personnel for “making a difference” in their life. Rhodes told students to savor the moment, and encouraged them to continue learning and continue growing.

“Each of you today has reached your goal,” Rhodes said. “Appreciate this day, but take a minute to realize what this day means to you.”

Following posting of the colors by the CSU-Pueblo Army Reserve Officer Training Corp., Caren Montgomery, who graduated with a bachelor’s degree in accounting, sang the National Anthem. After welcoming guests and introducing participants, CSU-Pueblo President Joe Garcia congratulated graduates on earning their degree.

“You should be proud of your accomplishment – it hasn’t been easy,” Garcia said.

Representing the CSU-Pueblo Faculty Senate, Brian Vanden Heuvel told graduates that education doesn’t stop with earning a college degree. He said professors teach students to think critically, and that it is up to students to continue nourishing this skill throughout their lifetime.

“As you walk across the stage and are handed your degree, you are considered educated,” Heuvel said.  “Many of you might believe you are done thinking, but you will never be done thinking. I hope you continue to challenge the status quo, that you take better and educated actions when doing.”

Accepting the microphone from Heuvel, CSU-Pueblo Student Body President Steve Titus told graduates they have seen remarkable changes during the past four years. Some of these changes have been stressful, he said, and graduates should feel proud for having stuck it out.

“You have earned something no one can take away from you,” Titus said. “You finished your education and that is something employers look for. Class of 2010, go out and be successful, but remember your roots here at CSU-Pueblo.”

Garcia told graduates they are joining a proud fraternity, and encouraged them to share the benefits received from hard work with the community. He also encouraged graduates to thank professors for opening their minds to new ideas.

“I encourage you to seek out a faculty member and thank them for having made a difference, as they taught you to think of things in new ways,” Garcia said.

Members of the audience tossed confetti into the air and beach balls to the graduates. Commenting on the spiritedness of the occasion, one woman said, “I have never seen such enthusiastic adults.” Rhodes agreed.

“I was told this was a rowdy group,” said Rhodes as graduates applauded and whistled loudly.

During his remarks, Rhodes told graduates to take a moment to appreciate this day as they take their next steps in life. Rhodes, who graduated from CSU-Pueblo with a bachelor’s degree in mass communications in 1999, is director of Mobile Strategy and Marketing for Disney Interactive Media Group in West Hollywood, Calif.

“Whenever I experienced success, it was because I was brave,” Rhodes said, “so don’t let fear get the best of you.”

Jennifer Mullen, who chairs CSU-Pueblo’s Mass Communications Department, said she remembers Rhodes as a charismatic student who made everyone laugh.

“He had a real drive, a real ambition to be great at what he wanted to do,” Mullen said.  “He headed to Los Angeles after graduation, determined to follow his dream, and he ended up at Disney, the place where dreams come true!”

Rhodes started his career with Disney at Radio Disney where he created promotions and strategic alliances that extended the brand into multiple distribution channels including television , online and mobile.  Prior to that Rhodes served at MGM Studios where he managed worldwide marketing for consumer products, interactive and location-based entertainment.

Rhodes’ appearance as guest speaker is another feather in the cap of CSU-Pueblo, said Sam Ebersole, a professor of mass communications with the Mass Communications and Center for New Media department. Dana Perino, who also is a CSU-Pueblo alum, served as press secretary to President George W. Bush.

“He was a very capable student and did well shortly after moving from Pueblo to Los Angeles,” Ebersole said of Rhodes.

Patricia Orman, who retired as an associate professor with the Mass Communications and Center for New Media department, said she has kept in contact with Rhodes since he graduated from CSU-Pueblo.  She said she is excited about the cutting edge work he found with Disney.

“I think (Rhodes) found a niche that many more recent students and alums will enjoy hearing about,” said Orman prior to the commencement ceremony. “I’m sure he will find some engaging words of wisdom for the Class of 2010.”

Garcia presented Rhodes with a plaque thanking him for his appearing as commencement speaker.  Representing the CSU-Pueblo System Board of Governors, Bonafacio Cosyleon congratulated graduates and wished them luck in their future endeavors.

“Each of you has worked hard to arrive at this day and is deserving of your degree,” Cosyleon said. 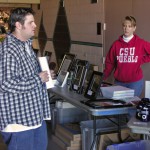 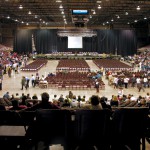 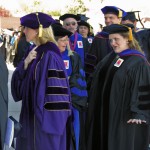 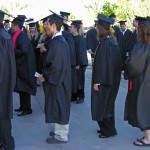 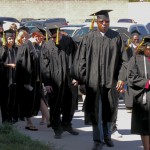 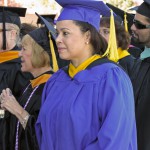 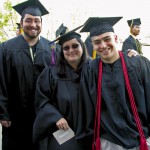 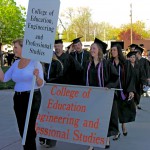 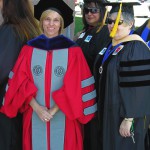 Top left: Frames designed to house diplomas were among the wares sold prior to the commencement ceremony.

Top center: The Colorado State Fair Events Center begins to fill up as the public awaits the start of the ceremony.

Top right: Graduates inch their way toward the events center.

Bottom center: Students graduating from the College of Education, Engineering and Professional Studies prepare to be recognized by the public.

Students should take advantage of free service to help health

Adventurer brings message of conservation through fun and excitement