The group known as Midnite Theory was originally from Thousand Oaks, Calif. The groups’ consists of two women and eight men ranging from all ages. Their music resembles that of The Roots with the funk of K.C. and the Sunshine Band.

Radical riffs came from the electrical and acoustic guitarist, Danny Shaw. He first picked up an acoustic guitar decorated with written words on it. As the performance transgressed, he picked up a red electric guitar. Shaw wore a fedora hat, which reminded me of Jason Mraz.

Like Mraz, he also has tattoos, one on each of his forearms, both of which are guitars.

The superb strumming was heard by the bassist, Matt Lieberman. He wore a turquoise shirt, jeans and skater shoes. The sounds Lieberman made on his bass would have made Flea from the Red Hot Chili Peppers proud.

The incredible ivory touches were a result of the two keyboardists, Jeremy Hanlon and Rachel Bourne. Hanlon also doubled as a hype-man. He wore a gray LaCoste sweater with a white dress shirt underneath, jeans and skater shoes.

Keyboardist Bourne reminded me of Tori Amos with vibrant red hair. She wore a black dress, stockings and high heels.

The three-horn bass section consisted of. The musicians responsible for the wonderful brass sound were Morgan Fitch on the trombone, James Lewis on the saxophone, and Jon Starr on the trumpet.  They were all semi-formally dressed.

Powerful pounding came from the drummer, Kristafari, who wore shorts and a graphic t-shirt. Each hit of the drum set was flawless and his style was relentless like Tommy Lee from Mötley Crüe.

The vibrant voice came from the mouth of the soulful songstress, Leilani Pruitt. She wore a gray shirt, black tight pants and boots. Her voice was so beautiful that it could make angels cry. It literally gave me goose bumps as the small hairs on the back of my neck stood up.

The lethal lyrics also came from the mouth of a young master of ceremonies known as Nash the Kid. He also played keyboard.

He walked through the crowd and proceeded to rap. He spoke after his performance. “We used to rap on beats,” Nash said. “Now we got a ten-piece band.”

The crowd sang along with their songs, “Two Girls,” “Bobby Sue” and “Feels So Good.” At the end of their performance, the crowd yelled for an encore as the group moved their stuff with the roadies and stagehands.

Next up was a hip-hop trio, Champagne Champagne, from Seattle, Wash. Members, Pearl Dragon and DJ Gajamagic first formed Champagne Champagne in August 2007. Several months later, Thomas Gray joined the group. According to their MySpace page, their only goal is to make music that makes them feel good.

Like Run DMC, Cypress Hill and Naughty By Nature, Champagne Champagne consisted of two master of ceremonies and a disc jockey. Like the hip-hop trios that came before them, the group had great stage chemistry, stage presence and crowd control.

They have a nice hip-hop and rock fusion. However, the bass lines were heavy and the treble was a little high. This may have been because there were too many speakers in such a small area.

The disc jockey, DJ Gajamagic, had a red music stand in front of him. He played the tambourine, as well as a green and yellow flute as he used a drum machine and laptop to disco jockey.

The first master of ceremonies, Pearl Dragon, aka Nick, had an Afro and wore a Member’s Only jacket. Under his jacket, he wore a red shirt, an African necklace, and a white T-shirt. He wore jeans with a purple hair pick in the back pocket and brown loafers.

Dragon’s appearance reminded me of a younger version of Jimi Hendrix with the same stage presence. He took off his Member’s Only jacket exposing a dashiki that looked like it had seen better days.

His lyrical style sounded like a hybrid of Lil’ Wayne (without the auto-tune) and Outkast.

During their performance, He jumped onto a speaker on the left side of the stage where a microphone hung upside-down. He then used both the hanging microphone and the one in his hand to get his message across.

He gave the crowd a show of his balancing abilities and made his way through the crowd. He finally made his way back to the stage and jumped off again. He landed right in front of me.

The other master of ceremonies, Thomas Gray, aka The Commish, has the resemblance of Questlove from The Roots, but with a smaller frame. He has a full, bushy beard, and he wore an orange beanie, a pair of jeans and a blue short-sleeved buttoned shirt with black loafers.

During their performance, Gray took off his blue-buttoned shirt and revealed a black shirt with the Internet station, a graphic of a moon, stars, three kittens, and a cat playing on a keyboard. The fans in front laughed with awe and amusement. They understood Grey’s sense of humor.

This was another phenomenal performance by an opening band. At the end of their performance, the band picked up their gear with stagehands and no roadies.

The headliners, Flobots, approached the stage at 10 p.m. The crowd cheered for Flobots as “Cool Like That” by Digable Planets drifts away from the speakers. The crowd applauded as the volume was lowered slowly. They appeared as they opened with a percussion only number.

Rabbit appeared first, and then Johnny 5 for the song, “Save Yourself,” followed by “Same Thing” as their second song. For a while, they alternated between songs from their latest album, “Survival Story” and their first album, “Fight With Tools.”

Rabbit walked as he sang acapella for the song, “Panacea for the Poison.” He slowly made his way to the stage from the speakers, and being as tall as he is, he was able to maneuver pass the speakers above his head quite safely.

Later in the show, Flobots moved in-sync from side-to-side.

Throughout the set, Rabbit pop locked throughout many songs. He did this move similar to Neo in the film, “The Matrix” where it looked like he was dodging imaginary bullets. Being that Flobots lyrics are aimed towards the government and are anti-war, it made perfect sense.

When Flobots sang their own rendition of “Happy Together,” they asked the crowd to jump as high as they could during the chorus. It was just like synchronized swimming at the Olympics.

I unable to get any photographs but I did purchase a concert shirt.

If you’re on a budget as I was, stick around near the stage when the Flobots are getting ready to leave. Then politely ask the roadie or stagehands for a copy of the groups set list.

In the end, the roadies and stagehands cleared the stage. As they were doing so, I was able to get a copy of the Flobots’ set list that was taped to the stage floor by one of the roadies.

I made my way to the after-party, which was downstairs at Sunset Live Presents Key Club. There, I was able to get my set list signed by all the members of Flobots.

If you are currently off-campus for the summer, stop by and support the Colorado music scene wherever you are. Here is a list of where the Flobots will be next: 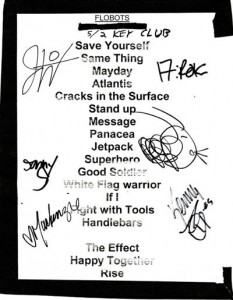 Please call or visit their website, flobots.com/tour-dates, for ticket prices and times.