Retired National Football League players Keith Davis and Devin Wyman connected with Colorado State University-Pueblo students as they shared what the choice of champions is, Feb. 19 in the Occhiato University Center Ballroom.

Although the 6-foot-8-inch Wyman was intimidating at first, the two men quickly gained appeal with their audience as they visited with students prior to speaking by handing out autographs and showing general interest in students’ lives.

Michael Webb II, a Campus Crusade for Christ student, said Davis had visited the campus each of the last two years and students enjoyed his speaking.  This was the first year for Wyman, who was asked to join by Davis.

When the men took the stage they shared stories 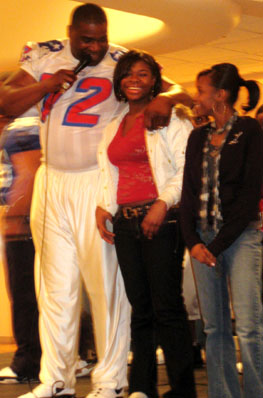 of their backgrounds, both coming from rough, California neighborhoods. Davis was raised in a broken home, losing his drug-addicted father to suicide at age 4, and witnessing his mother’s alcohol and cocaine addictions. Wyman lost a full-ride scholarship to play basketball and football at the University of Southern California as a result of his participation in drug-dealing.

Both Davis and Wyman shared with students that the greatest and most life-changing choice they have made in their lives is what they explained as a one-on-one relationship with God.

Davis later said one of his great role models is the Lord because when he was 16 years old he said he was sold out and committed to Him. For him, “It’s not a religion. It’s a relationship.”

“You can have all the finer things in life but if you’re heart ain’t right it ain’t worth nothin’,” Wyman said.

Davis graduated from USC and was signed by the New York Giants.

Wyman’s journey took him to play football first at Kentucky State University, and was later drafted by the New England Patriots. He played in a Super Bowl his rookie year.

“I can’t change my past, but I can change my future,” Davis stressed as his theme for the night.

He encouraged students not to let their pasts dictate what their future would, or could, be and to never give up on their dreams. To illustrate the possibility of reaching these dreams, Wyman did push ups with a petite female student, then a medium female student, and finally a well-built male student standing on his back. Each student symbolized a dream, small, medium and large.

Davis spoke of the importance of carrying on even when the dreams seemed difficult or heavy, because anything is possible if students will just make the choice to overcome.

Davis and Wyman impressed students with demonstrations of perseverance. Davis rolled a frying pan up like a burrito, and Wyman blew up a rubber, hot water bottle until it popped.

Both men also spoke on the importance of respect and true love in relationships.

Davis and Wyman told how much they cherish their wives and referred to them as their “queens”, encouraging students to respect, and expect respect from, each other.

After Wyman and Davis spoke many students gathered for pictures and autographs.  They chose one lucky student, of many volunteers from the audience, and allowed him to try on their championship rings, and a USC Rose Bowl jersey. 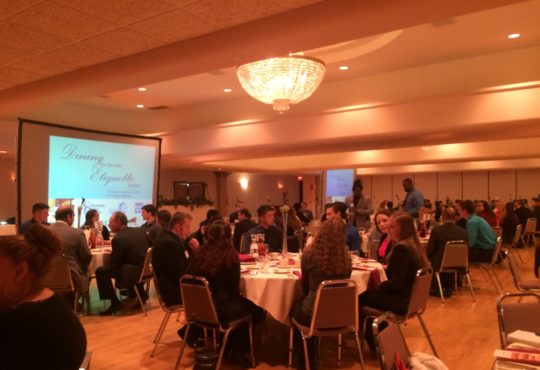