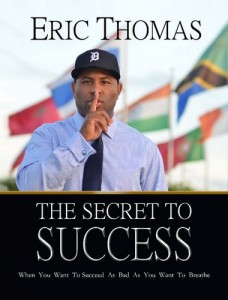 Eric Thomas, also known as the hip-hop preacher, encouraged students to make the most of their college experience.

During the beginning of his speech, Thomas spoke of his shock at the turn out, saying he didn’t bring his videographer because someone told him there would only be about 30 people in attendance.

Thomas then began to tell the audience some of his background.

Thomas grew up in Detroit, dropped out of high school, and never knew his father. Through the help of people in his life, Thomas said he went back to school and is currently working on his doctorate at Michigan State University.

Despite the rough beginning of his life, Thomas has become a sought after international speaker and author. His book, “The Secrets to Success,” has sold more than 10,000 copies.

Thomas said his background inspired him to help other people overcome challenges. Through his inspiration, Thomas developed the Advantage Program, which according to his website, is an undergraduate retention program for “academically high-risk students of color.”

Thomas spoke of his background and how it has affected his current family life. He talked about Sunday being “family day,” and how he wanted to be there for his kids because his father was not there for him.

The crowd participated throughout the entire presentation. Thomas encouraged dialogue, and frequently asked for feedback and questions from the audience. He also kept the audience laughing with his quick wit and one-liners. Students responded enthusiastically, asking many questions and even breaking into a round of applause.

Thomas first encouraged students not only to learn while in school, but to apply what they are learning.

“You are in the Mecca of knowledge,” Thomas said. “But knowledge isn’t power, applied knowledge is power.”

Thomas emphasized that you cannot apply what you’re learning if you are not using your resources, encouraging student to go back to their teachers and classes if they had not learned anything.

Thomas said in a portion of his speech that he studied Mother Teresa, Michael Jordan and Martin Luther King, and reminded his audience of the value of using time wisely.

“The difference between the greats [and normal people] is they realize they don’t have forever,” Thomas said. “Every hour of your day you should either accomplish something or be asleep.”

Thomas also spent a large portion of time on the value of putting others before yourself.

“The focus changed from me to others. That’s what I learned from God,” Thomas said.

When Thomas asked for two or three students to stand up and tell how they would change after his speech, he received an overwhelming response. Student after student stood up and shared how they would get up earlier, start going to class, take more notes, and stop wasting as much time.

“I came on a whim, but he taught me to remember what I came (to college) for; not just for myself but for my family,” said Edwin RubalcavaVargas, a freshman Spanish major.

“(Thomas challenged me to) put more effort into what I do,” RubalcavaVargas said.

Thomas even went so far as to give his personal phone number to some students who stood up to share.

“I’m going to invest 21 days in you because you stood up,” Thomas said to one student.

He also gave his phone number to another student who asked if Thomas would have a job opportunity for her when she graduated.

Thomas’ speech challenged students to build good habits now, and to work on building good character while they are in school.

“It’s not just about getting a degree; it’s about who you become in the process,” Thomas said.

Renovations underway on the Underground of the Occhiato University Center

Outdoor Pursuits offers a way to connect outside the classroom

A college student’s guide to surviving winter at CSU-Pueblo

Spirit Fest 2008 at the Riverwalk