The fair featured 65 participants from around the nation specializing in holistic healing and medicine.

Temara Speaks, a Puebloan, has produced the event since the inaugural fair in 2000.

“Six months out of the year I’m working on these events,” Speaks said. 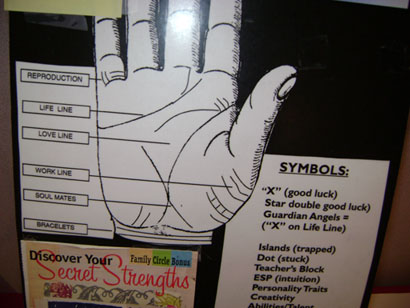 Holistic healing dates back thousands of years, but only recently has holistic medicine become an accepted form of alternative medicine.

Fair participants were not just local, they represented a good portion of the country.

“We have people who came from all over,” Speaks said. “I have a woman from California and from New York here to be participants.”

Organizing a fair with participants from around the nation may seem like a difficult proposition, but not for Speaks.

“They contact me. I don’t do the contacting,” she said. “I have a Web site and I get responses through that. I think word of mouth is the best method for this event.”

Attendees paid $5 to enter the fair, but the cost of admission included free workshops and presentations throughout the two-day event. The fair offered a free moment of rejuvenation and deep meditation chair, and several booths offered free demonstrations.

The fair has grown considerably since 2000.

“We started out with about 300 in attendance, but now we range from 800 to 1,000,” Speaks said. “I’d love to see the attendance grow. That is one of my main emphases now, to grow the attendance.”

She added that when the fair began the attendance was nearly all women, but now she sees almost as many men who attend the fair. The crowd was represented by young and old alike with an even distribution between the genders.

“When people leave this fair they should feel better about themselves. That is our number one goal,” Speaks said.

CSU-Pueblo has hosted the fair for several years and Speaks wants to keep it that way.

“We like it here. It seems to work for us,” she said. “It’s a nice facility with the ambiance.”

The next fair will be on November 7 and 8 in the OUC Ballroom.