Colorado State University-Pueblo is doing its part to help the economy.

Dr. Kevin Duncan’s regional economics class in the Hasan School of Business recently released the results of a study conducted on behalf of Huerfano County which said initial construction of the proposed Pole Canyon Wind Project could add money to the county’s economy.

The increase could be more than $10 million.

The report, which was conducted by HSB international undergraduate student Zelinda Singh, was submitted to CSU-Pueblo alumnus John Galusha, who is the Huerfano County administrator.

According to Galusha, the wind farm will employ about 150-200 people during 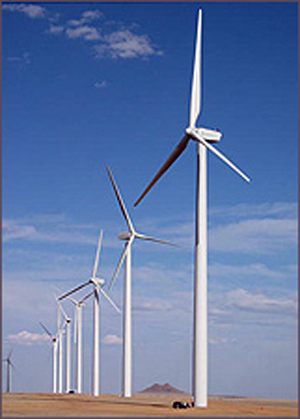 construction over an eight to 12 month period. The construction will begin in the next two to three years.

When the construction is done, the towers will operate with eight people which will have $60,000 annual salaries.

Leases with land owners have been obtained for 26,000 acres with the intent to install 300 mega watts of power at two mega watts per tower – or 150 towers.

The profit from them totaled $5.9 million and $4.2 million, respectively.

Construction activity will create an additional 58 jobs and approximately $54,000 in local taxes. $21,000 will be in city and county taxes and $33,000 will be in local property taxes.

Galusha said the study had been well received by the Commissioners and Planning Commission and will help Huerfano County make site decisions for future wind farms. The study was shared with Tri-State, Xcel Energy and Pole Canyon Wind.

“I especially appreciate the university being available for this type of community assistance,” Galusha said.

This data can be used to provide an estimated economic impact per tower built according to Duncan.

Duncan cautioned it is important to remember the impact is based on the percent of construction that will be done by Huerfano County resident workers, not completed by construction workers outside of the county. It is estimated that 20 to 30 percent of the one hundred fifty to two hundred workers involved in the initial county will reside in the county.

This allows researchers to capture the impact of the wind tower construction on the county in a precise way.

The impact of the ongoing operation of the wind energy towers and the rent paid to area landowners will add another $4.2 million annually to the county’s economy. Along with the additional jobs and taxes, the ongoing activity would support 14 more local jobs and contribute approximately $268,000 to local taxes.

This data can be used to estimate the yearly economic impact of operating each wind tower in the county.

Other countries are already in the wind industry.

The biggest wind farm in Colorado, and one of the largest in the nation, is located on a cattle farm near Lamar, Colo. The farm is a part of the 162-MW Colorado Green Wind Farm. Each turbine produces 1.5 megawatts of electricity.