Openfeint, while it has its own app, is really about social networking throughout iPhone games. Openfeint does this by making application programming interfaces. Basically these make interaction between different programs possible, and Openfeint makes them available to developers through their site.

When developers integrate these APIs into their apps, it allows for cross-game networking. Openfeint’s site describes it as “XBOX Live meets Facebook for iPhone.” Their site also claims some 25 million users and 1,900 games are using Openfeint.

It sounds interesting, but what does the Openfeint App itself do? It gives you games for free, daily. Most of the games sell for 99 cents to $2.99, and are offered free for a limited time, which is usually one day. It also allows you to browse through a library of Openfeint-enabled games.

Openfeint’s app offers a new app each day. Because of this abundance of apps, this means some of them are going to be trivial games. While this is slightly annoying, it’s nothing a simple app deletion can’t fix and the good usually outweighs the bad.

While I don’t think it merits a spot on the first page of an iPhone, it definitely earns a daily use. It does have some negatives though, the worst one being the load time.

Older model iPhones and iPod Touches will use almost a full minute to load the app. While a single minute isn’t a lot of time, it’s not usual for iPhone apps to take so long to load. Newer phones and iPods may not have this problem and faster Internet speeds may help to lessen this problem.

The second problem is more of a technical issue with the iPhone OS. When purchasing the free apps, the app directs the user into Mobile Safari, iPhone’s internet browser, and then to the App Store. 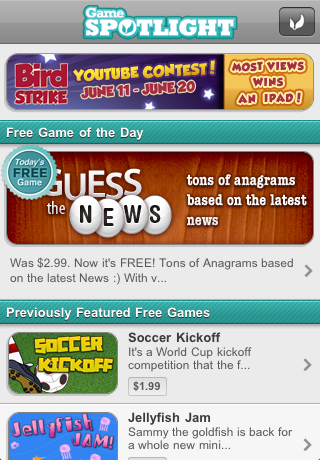 This loses the user’s previous position in the app. This will hopefully be corrected soon after the iOS 4 launch by enabling some type of multitasking. iOS 4 was launched June 21, but only works on iPhone 3G and iPod Touch 2nd generation and later device models.

Setting up an account doesn’t require much personal information. If you’re comfortable with only the basic services, you don’t need to give any information. Creating a username will get you up and running.

Openfeint also utilizes Twitter and Facebook integration. You can even personalize how it posts to your pages. This is where it asks for your information, but Openfeint states that your information will never be sold, and as long as you have set your Facebook and Twitter privacy settings correct, this isn’t a problem.

Openfeint even allows any new game you purchase to find accounts stored on your iPhone or iPod Touch. This means you won’t have to download your account in every app and you can even have multiple accounts on one device.

As for the social interaction, the iPhone hasn’t yet evolved into full social gaming, by which I mean playing directly with another person online. It does, however, offer a way to see your friends’ scores and compete with them individually, and even post your results to Twitter or Facebook.

Overall Openfeint’s platform adds depth and social interaction to iPhone gaming. The Openfeint Game Spotlight app highlights free games each day using Openfeint’s social platform and is worth checking daily for the times that worthwhile apps make their way to the top of the heap.

Those interested can check out the Openfeint Game Spotlight here.

The Cannon is “back in black”