Colorado State University-Pueblo hosted a Battle of the Bands last night in the Occhiato University Center Ballroom to establish the opening act for rapper Ludacris.

Several musical genres were represented in the contest.

In the end, solo artist Kraig Brownlow was chosen by a panel of judges to open CSU-Pueblo’s spring concert event.

“I was so surprised to actually win, especially since I am just a solo act,” Brownlow said.

“To be opening for Ludacris will be awesome and should give me some exposure.” 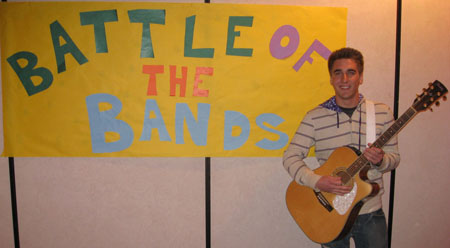 Brownlow, who played an acoustic set, has been a singer his entire life, but added the guitar to his repertoire two years ago.

Hip-hop outfit “Made up Mind” opened the festivities. The group has opened for several national touring acts including “Souls of Mischief” and “Tha Alkaholics.”

“This was the biggest adrenaline rush I have ever had, the crowd was so responsive,” said 18-year-old CSU-Pueblo student Justin Vicars, who is the electric guitarist for the band.

“We have played at Zippers and other bars and our entire band has dreams to be aspiring musicians.”

The hip-hop group “Image” featured three members who are related. The ensemble writes and produces its own music.

“Clockwork Lullaby” fused funk, blues and rock together for its sound. The group practices in the basement of a band member and plays all original music.

Ludacris will play Massari Arena on April 16 at 7 p.m. Tickets for full-time CSU-Pueblo students are free.

End of an Era