HomeUncategorizedLast chance to catch Venus
Uncategorized
9 years agoUncategorized
1.2kviews
0shares
Spectators gathered Tuesday, June 5 on the west side of the Physics and Math Building at CSU-Pueblo to observe the Transit of Venus.

The astronomical event took place after 4 p.m. Eastern Standard Time, and lasted six hours as Venus passed between the Earth and the sun. Unlike a solar or lunar eclipse, the rarity of the Venus Transit offers a once in a life time opportunity to witness Venus pass between our planet and the sun.

Percival spent much of his evening explaining the transit to amateur astronomers as they viewed it through the eight-inch Celestron telescope dialed in on the sun. The Celestron telescope is known as a “Go to” telescope according to Percival. The telescope can be programmed by a computer to jump to any constellation or planet in the sky for easy viewing.

With filtered lenses on the telescope the transit was easily visible as it appeared as a small black dot sweeping between Earth and the sun. The last time the Venus transit occurred was in 2004. The next occurrence will not happen until 2117.

With the unlikely chance that anyone viewing the transit will be on Earth for the next one, Percival expressed the popularity of this rare event.

“We’ve known about this for some time now, but with the news, it has become more popular,” he said.

Percival feels that pioneering research by Edmund Halley in the 1700s on the Venus transit helped astronomers discover the orbital distance between planets. Halley was an astronomer who is notably known for his discovery of Halley’s Comet. Transits help people measure the laws of physics.

“All kinds of tests can be gathered from observing transits,” Percival said.

Notably today we can gather information from observing transits that play a huge role in our communications.

“The more we understand transits, the better we are at gathering information for launching satellites,” Percival said.

Percival was the astronomical celebrity Tuesday evening to the group of six as they viewed the transit. His enthusiasm on the event was contagious as the small group took turns viewing through the telescope.
Some of the people were taking pictures of the sun with their cameras with filtered lenses in hopes of capturing their own personal images of the transit. The transit is not safe to view without some form of filtered lens. Most filters used on the cameras were lenses specifically designed to block out the intense light radiating from the sun.

Although the group of six was straggling behind to catch one last glimpse of this historic astronomical event, these folks showed endurance as they casually viewed the transit from the beginning to the end.

Throughout the evening, Percival guessed that nearly 100 people stopped by to take a peek at the passing of Venus after setting up the telescope.

With the sun almost set, and the transit window closed for the next 105 years, one more person came walking up to the telescope as Percival excitedly shouted to the man.

“Quickly, have you had a chance to look at the Transit?” 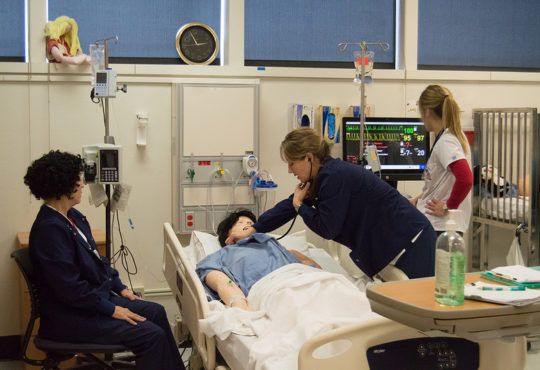