Justin Thomas Brown has been both a disc jockey and a producer for 10 years.

Brown doesn’t have a DJ name like most in the genre. He said he produces under the name “whatever’s clever”.

Brown said he got into DJing when he turned 18 after going to a rave in Fort Collins, Colo. called Moons of Jupiter. He said he was blown away by the music and knew he had to be a part of it.

Brown said he prefers to use tech house and techno as his style of dance/electronica. He said his inspiration came from a night of partying when he saw someone who had turntables but couldn’t mix well. Brown said he thought to himself, “I could do better than that!” 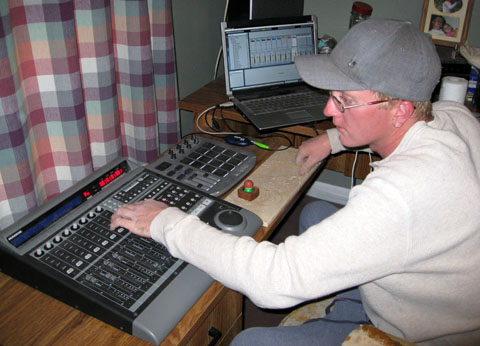 Brown said he prefers to use digital and remembers using turntables for a long time, but he finally went to the “dark side” of digital.

Brown said the best times he has ever had have been mixing when he’s home alone. The biggest crowd that Brown has spun in front was about 100 people.

He said he wouldn’t like to be on the same bill as someone famous.

“Everyone would just be waiting for me to get out of the way of who they came to see!”

According to Brown, the record that usually gets his crowd moving is called “Gravitation” by Nick Muir.

He said his favorite record to use during a set is “102 Miles From Here (Solead Remix)” by Vibrasphere because it goes good anywhere.

Brown said he remembers raves being more complicated before they were sanctioned. They were longer and harder to find and the guy searching people at the door just kept whatever “goodies” he happened to find, Brown said.

In his spare time, Brown works a regular job as a handyman, but he said his main passion is writing and producing his own music.

A night of fun and school spirit at the Homecoming dance